Anand Mahindra shared video of a lucky escape of a biker caught in the middle of a Bolero-JCB crash.The sturdy Bolero SUV is winning hearts on internet for saving the helpless biker.
By : HT Auto Desk
| Updated on: 28 Jul 2020, 08:40 PM 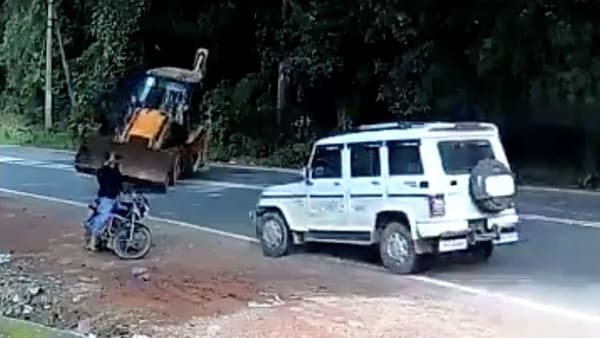 A video shared on social media showing a head-on collision between a JCB machine and a Mahindra Bolero SUV has gone viral. It shows how the crashing Bolero SUV saved a biker standing on the side of the road, watching helplessly at the two vehicles collide right next to him.

Mahindra Group chairman Anand Mahindra shared the video from his Twitter account. The Bolero SUV's role in the biker’s lucky escape won his heart as he wrote, "It appears as if the Bolero came to life and its only mission was to save the biker’s life." Not only Anand Mahindra, the Bolero SUV is winning hearts on internet too with the video garnering over 1.5 million views already.

The incident took place on July 25 morning, though the location of the incident caught on a CCTV is still not known. The video shows that a JCB machine, speeding on the road, suddenly loses control and veers off its lane. The incoming Bolero SUV on the other lane tries hard to slam on the brakes to avoid a collision. But it could not stop properly before the JCB machine came crashing into it.

All this while the biker is seen standing on the side of the road, apparently talking on phone. Despite being off the road, he suddenly finds himself in the middle of the crash. As the out-of-control JCB machine is seen heading straight at him, the hapless biker seems lost as what to do to save himself.

The driver of the Bolero SUV, in a desperate attempt to save himself from the crash, slams hard on the brakes, and moves further to the left of the lane. Fortunately for the biker, the collision happened just before the JCB machine would have run him over.

However, he was thrown off by the impact as well as his bike. But he was lucky to live to tell the tale.