Home Auto News Whisky As Fuel? Glenfiddich Is Running Trucks On Biogas Made From Liquor Waste

Whisky as fuel? Glenfiddich is running trucks on biogas made from liquor waste

Glenfiddich claims that the biogas made from whisky waste cuts CO2 emissions by over 95% compared to diesel and other fossil fuels, and reduces other harmful particulates and greenhouse gas emissions by up to 99%.
By : HT Auto Desk
| Updated on: 27 Jul 2021, 02:00 PM 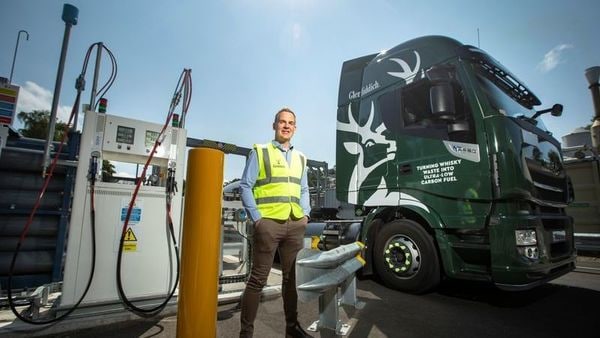 Stuart Watts, a director of Glenfiddich parent company William Grant & Sons, stands by a fuelling station next to their truck, that runs on whiskey-by-product based biogas, in Dufftown, Scotland, Britain in this undated handout obtained July 26, 2021. (Courtesy of William Grant & Sons)

Here is one for the road, quite literally. Popular Scotch whisky brand Glenfiddich has started using biogas made from its whisky waste to run its delivery vehicles. What’s more interesting is that the company claims this will help it reduce vehicle pollution, reducing CO2 emission by as much as 95%.

Glenfiddich has already started to convert its delivery trucks to run on these biogas fuel. The initiative is part of a "closed loop" sustainability project. The fuel stations have been set up at the company’s Dufftown distillery in north-eastern Scotland.

Glenfiddich claims that the biogas made from whisky waste cuts CO2 emissions by over 95% compared to diesel and other fossil fuels, and reduces other harmful particulates and greenhouse gas emissions by up to 99%.

The company said that the biogas fuel made from whisky waste is being used to run at least three of its delivery trucks to transport products across four of its sites in central and western Scotland. The trucks, which are converted vehicles from commercial vehicle manufacturer Iveco, usually run on liquefied natural gas. Glenfiddich said that each truck will be able to displace up to 250 tonnes of CO2 every year.

The technology has been developed by its parent company William Grant & Sons to convert its production waste and residues into an Ultra-Low Carbon Fuel (ULCF) gas. The distillery can now recycle all of its waste products and use them to produce fuel. Stuart Watts, distillery director at family-owned William Grant & Sons, said, "The thought process behind this was 'what can we do that's better for us all?'"

Glenfiddich now plans to implement the technology across its fleet of around 20 trucks and scale up to fuel other company's trucks as well in the fut.