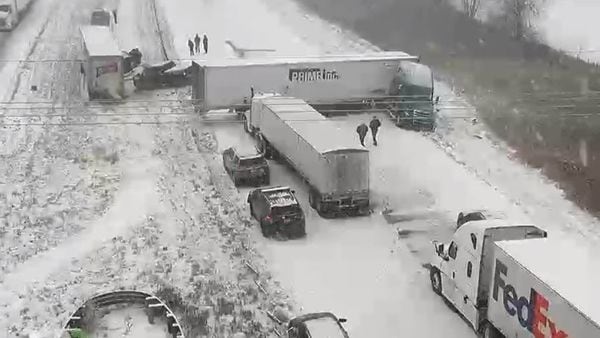 Notably, the first semi truck acted as a barrier, preventing other semi-trucks and SUVs from sliding onto oncoming lanes.

Driving on highways during peak winter season, especially when there's snow all around, can be a risky business. Yet, if such a trip is necessary, it is important to take all the safety precautions and yet, sometimes mishaps cannot be avoided. In a similar incident, a semi-truck led to a seven-vehicle pileup on a highway in Minnesota, US.

The pile-up included five passenger vehicles and t semi-trucks. A footage of the video posted on YouTube shows that when the first semi-truck jackknifed across the highway, it pushed an SUV in front of it. The pickup truck behind the semi swerved to avoid it, but while sliding from the maneuver, its passenger side front bumper clipped the semi’s trailer and the driver was then stranded on the grass.

This was followed by another semi-truck bumping into the first one’s trailer, unable to brake quickly enough in the slippery conditions caused by the snow. The semi came within inches of another SUV running off the road to avoid the crash. Then a third SUV drove off the road to avoid a collision. However, unfortunately, a third semi-truck behind it was doing the same thing, but the SUV wasn’t able to slow down on the snowy grass, and ended up hitting all three SUVs that had pulled off the road.

Notably, the first semi truck acted as a barrier, preventing other semi-trucks and SUVs from sliding onto oncoming lanes. This helped prevent collision with other vehicles.

After the seven-vehicle pile-up, there was a two-hour closure of the highway towards the southbound lanes, before a single lane was eventually reopened. Fortunately, there were no injured reported from the massive collisions.

However, the Minnesota State Police received 286 crash reports on the day of the snow storm, of which 21 resulted in injury and 21 involved other jackknifed semi trucks across the state.