Black ice is being blamed for creating slippery conditions on a highway that led to the massive pileup.
By : HT Auto Desk
| Updated on: 24 Dec 2021, 09:54 AM 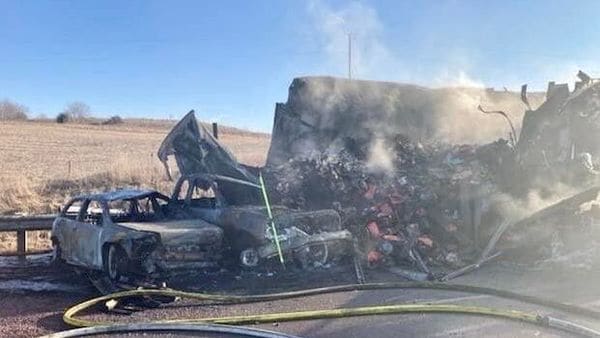 In an extremely terrible incident of road accident, as many as 40 vehicles were involved in a massive pileup on a highway in United States' Wisconsin on Thursday. The accident took place during the early morning hours and it is being reported that black ice led to slippery conditions which was the main reason for the unfortunate incident. While images and video doing the rounds on social media reveal a ghastly sight, the fortunate about it all is that no injuries were reported.

Black ice refers to a thin coating of ice which is often more dangerous than other winter formations on roads because these aren't always visible or evident to motorists. Local reports from Wisconsin state that because of the low temperature and rains, the road where the accident eventually took place was layered with black ice.

It isn't clear which particular vehicle or vehicles was or were the first to lose control but the eventual scenes were quite horrific with massive flames erupting from the crash site. Rescue personnel were quick to reach the spot and take out the motorists from the vehicles involved before cordoning off the stretch. Traffic movement also remained affected here for quite some time.

As the sun came over the horizon, the extent of damages became more evident with many of the vehicles appearing damaged, possibly beyond the scope of repairs. A few vehicles were also charred and is unlikely that these may be salvaged.

While local authorities are investigating the entire incident, it is not clear yet if one or several of the motorists were guilty of speeding in unfavorable road conditions. Even when driving at safe speeds, black ice on roads can pose a big challenge and a driver needs to be extremely cautious in a vehicle that ought to be fitted with winter tyres which have more grip and offer better traction.