Home Auto News This One Off Pagani Supercar Crashes Again, Heads To Italy For Repairs

The Pagani Huayra Pearl supercar seemed to have suffered a damage after rear-ending a yellow Porsche Cayman GT4 on a highway.The Pagani Huayra Pearl's first crash took place in July 2016 in Paris, which was just a few months after it was delivered to its owner.
By : HT Auto Desk
| Updated on: 28 Dec 2021, 05:57 PM 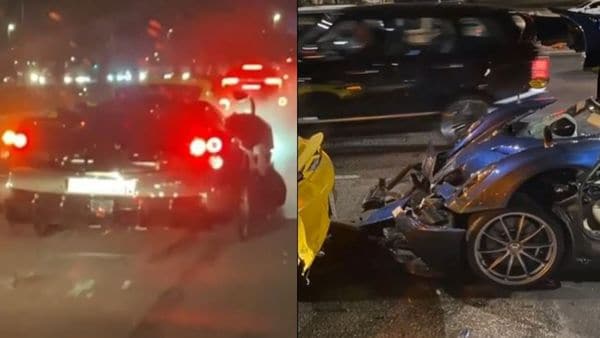 Special edition vehicles are ‘special’ for a reason, all the more when they are just one of a kind. You can then imagine the disappointment of the owner of a one-off Pagani Huayra Pearl that crashed for the second time since hitting the road. The supercar recently crashed in Saudi Arabia while on a highway during a traffic jam.

The Pagani supercar seemed to have suffered a damage after rear-ending a yellow Porsche Cayman GT4 on the highway. The front parts of the carbon-fiber bodywork will need to be repaired alongside several other components. Fortunately, the accident wasn't too serious and there were likely no injuries.

However, the repair bill of the customized vehicle, which has headed back to Italy, is sure to be a big setback for the owner. Yet, it might not be as high as the first accident of the vehicle since its chassis, engine bay, and the largest portion of the bodywork appear to be intact.

The Pagani Huayra Pearl's first crash took place in July 2016 in Paris, which was just a few months after it was delivered to its owner. During that accident, the Italian supercar had sustained severe damage on the rear end but was fully repaired in Pagani’s headquarters. The vehicle manufacturer offers various after-sales services to owners of the Zonda and the Huayra supercars such as repairing or upgrading any model with factory-spec spare parts.

The Pearl was Pagani’s first custom-made Huayra which was then followed by other examples such as Manny Khoshbin’s Hermes, Alejandro Salomon’s 730S, and BC Roadster Supernova.

One can only hope that the owner of the one-off supercar remains extra careful while driving in the future. If at all there is a third crash, the owner would certainly regret buying the vehicle as the repair bills will surely not be very generous.