The Mahindra Scorpio driver reportedly started rash driving before hitting the motorcyclist.
By : HT Auto Desk
| Updated on: 06 Jun 2022, 11:52 AM 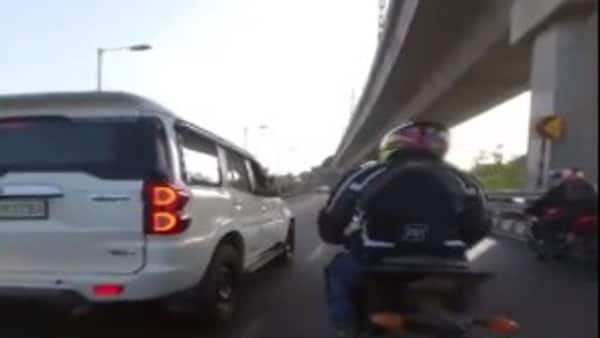 (Watch: This man in a fit of rage throws an axe at fellow driver)

The post by the news agency claims that police have said that they have taken cognisance of the matter and an investigation into the incident has been launched. Delhi Police reportedly identified Mahindra Scorpio and decided to take suo moto action in the case. Delhi Police has also requested the motorcyclists to file a written complaint. The news agency reports that an FIR will be filed at Fatehpur Beri police station.

The report claims that the biker who was hit by the SUV said that he along with his 8-10 friends were returning from Gurugram to Delhi when the Mahindra Scorpio came near them and started rash driving. The Mahindra Scorpio driver reportedly threatened and verbally abused his friend. "My friends slowed down a little but I drove ahead. The man sped up, hit my bike and sped away," the motorcyclist further added.

#WATCH | A man hit a biker with his four-wheeler following a heated verbal exchange with the biker group, near Arjan Garh metro station in Delhi. (05.06)

Police say they've taken cognisance of the matter & investigation is on.

The motorcyclist was not seriously injured due to the incident despite such a hard impact. That was probably because of the protective gear he was wearing.