Home Auto News Watch: This Man In A Fit Of Rage Throws An Axe At Fellow Driver

Watch: This man in a fit of rage throws an axe at fellow driver 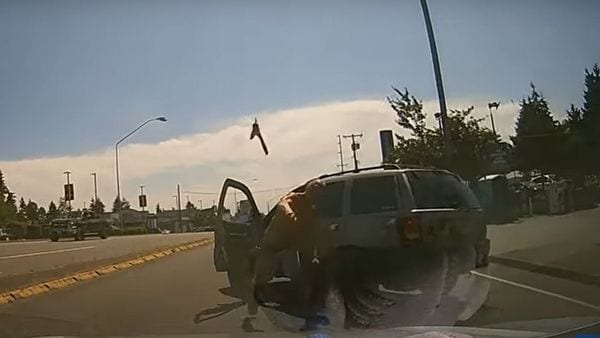 Screengrab from the video posted on YouTube by Q13 FOX Seattle.

Road rage is common around the world but some may turn intensely ugly pushing a driver to express the outburst to an extent that may lead to grievous injury if not fatal. And this video that was recently captured is a perfect example of the described situation.

A video released by the King County Sheriff’s Office in the state of Washington was recorded through a dashcam of a vehicle. Carscoops reported that as per Q13 Fox Seattle report, the location of the incident was NE 145th St I-5 ramp where an SUV driver was repeatedly honking at the mentioned vehicle. Following this, the driver of the dashcam car opted for the Ballinger Way exit in Shoreline in an attempt to avoid a confrontation, however, it was followed by the SUV.

In the video, one can see then the driver of the SUV steadily moved past the vehicle, blocking its way. A person came out of the car and threw an axe at the windshield. The report stated that despite the insane act, fortunately, no one was injured. The person was identified through an additional surveillance video and was arrested three days after the incident. The report also mentioned that the accused is facing multiple felony charges after fleeing Snohomish County deputies.

It was also stated that this is not the first time that charges as such have been put on the mentioned person. It is also being suspected that after this act of road rage, the person went ahead and carried a robbery.