The official teaser video of Tesla Cybertruck running in the EV maker's showrooms will easily pump up all those who are waiting for the vehicle to be launched.Tesla had unveiled the Cybertruck nearly two years ago and recently the EV maker delayed its launch until 2022.
By : HT Auto Desk
| Updated on: 25 Oct 2021, 02:59 PM 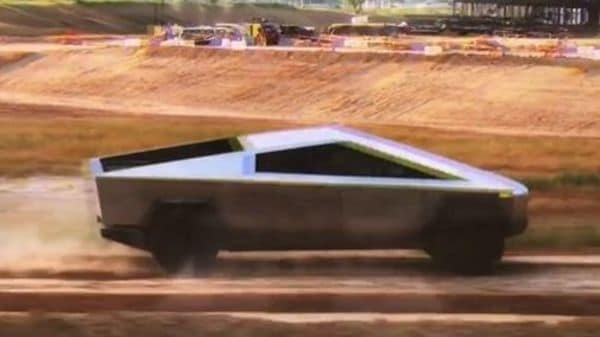 A fresh teaser video of Tesla Cybertruck has emerged online in which the vehicle can be seen driving in both urban and rural environments, as well as near the premises of the unfinished Texas Gigafactory where the vehicle will be manufactured.

The one minute-long official teaser video was recorded by EV advocate Harsimran Bansal during his visit to one of the Tesla showrooms and posted by him on Twitter. In the video, the Cybertruck also performs some drifts in a wheat field and treats the Austin factory site as a kind of high-speed off-road course. However, in any and every setting, the vehicle looks unconventional, and like something from a different planet.

The official teaser video running in Tesla showrooms will easily pump up all those who are waiting for the vehicle to be launched. Tesla had unveiled the Cybertruck nearly two years ago and recently the EV maker delayed its launch until 2022.

The Cybertruck seen in the video looks similar to the prototype that was unveiled in November 2019. However, the production version is expected to come with several modifications such as slightly altered proportions, staggered wheels, side mirrors, windshield wipers, daytime running lights, among others.

Recently, a prototype of the upcoming all-electric pickup truck was spotted at Merced Country Castle Airport, California. The test mule was spotted with wipers and ORVMs. Even though the production and launch have been delayed, people's excitement for the unconventional electric pickup continues to stay strong.

Tesla had recently announced that it is making progress with the Cybertruck’s "industrialization" while the casting of the electric pickup’s initial exoskeleton has already begun, meaning that the vehicle development is already in process.

As per earlier revelations by Tesla, the Cybertruck will be able to accelerate 0-96 kmph in less than 6.5 seconds and have a range of over 402 km on a single charge.