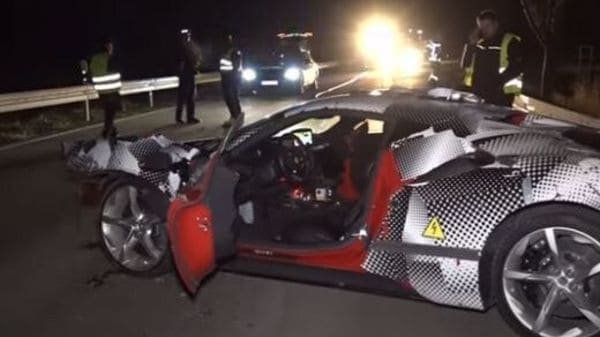 The Ferrari SF90 Stradale has repeatedly made headlines as the first-ever Ferrari to feature a plug-in hybrid electric vehicle (PHEV) architecture. Its V8 engine, 770 hp on offer and ability to fire to 100 kmph in 2.5 seconds all showcase what the engineers at Ferrari are capable of. And so, images of an absolutely wrecked Ferrari SF90 Stradale prototype is bound to dismay almost everyone.

In an incident reported in Germany's Hoffenheim, a camouflaged SF90 Stradale prototype bore a sorry look after it reportedly crashed into a side barrier. Local reports suggest that the supercar slammed into the barrier several times before coming to a stop. And if the extensive damage to the outer body wasn't enough to reveal the scale of the accident, the battery pack inside the vehicle also caught fire.

Images reveal that there were several test equipment inside the vehicle but it is not clear for what purpose was this prototype out and about.

There were no reports of any casualty which is perhaps the only good takeaway from the entire incident. Much of the credit would be directed towards local fire service personnel who managed to control the flames in time. This is especially significant because while EVs are becoming more and more common, the procedure to bring a fire in such a vehicle under control has not clearly been defined anywhere.