A genuine love for driving, an affection for nature and a bond with India prompted Danny Haberer to live on the move. A 2008-model retro-fitted Mahindra Scorpio is now his friendly tour guide.
By : Shubhodeep Chakravarty
| Updated on: 15 Sep 2022, 13:31 PM

Danny Haberer has no inhibitions posing for the HT Auto lens, just as he has no qualms in a complete introduction to and walkaround of his 2008-model Mahindra Scorpio motorhome.

Home may be thousands of miles away on another continent but it can also be wherever Danny Haberer parks his Mahindra Scorpio in a shade of earthly brown body tone. Over and onto the more glorious side of the 50s, the Dutch man first landed in India back in 2014. It was love at every sight but a more prolonged stay wasn't on the cards. Not until the pandemic anyway. The world changed and so did Haberer's view of the world and life at large, a motivating factor which prompted him to pull up anchor and travel across India in his modified Mahindra SUV.

Hailing from Amsterdam, Haberer has developed a special bond with India over the past several years. He has been to and around several cities and scenic places but Goa was his base point where he helped an associate manage a restaurant. But the pandemic made him realize that while Goa can be magical, the real charm is in being on the move and seeing it all. “Life can be short and the pandemic made me realize that it can also be unpredictable. It was then that I realized I need to see more, much more of this country," he tells HT Auto over by a scenic mountain cliff in Rayta Hills near Udaipur. “The first Monday after the first lockdown was lifted, I got into my car."

Haberer says hotels were still scarce and the idea of stopping and pitching a tent every single day was hard. “So I decided to transform a simple Scorpio into a motorhome," he explains, pointing to his customized diesel-engine powered 2008 SUV model.

Essentials: Safety with a tad of ‘luxury’

A foreigner driving a modified SUV across the length and breadth of the country can invite a whole lot of curious glances and stares. Haberer doesn't mind. But his personal safety and that of his beloved home on wheels still is paramount. “I sleep inside with a pair of car keys in my pocket. In case of an emergency, I should be ready to drive out within seconds," he says just as a local tour guide comes to warn him of leopards in the area. “I'll be careful," he tells him before explaining that leopards are actually far more interested in the goats in the area than people.

But it isn't just about wild animals. “I have my own medical kit and oxygen cylinder bottles too. At night, I keep all my car doors locked and windows rolled up for security. For ventilation, there are four fans in the car - some upstairs and others downstairs, all powered by a reserve battery inside the vehicle," Haberer says, signaling towards the bunk-type bedding on the roof of the Scorpio. Access from a specially cut vehicle roof area is a bit of a squeeze but there's just about adequate room on the ‘first floor’ to sleep two. “Very comfortable," he claims. “Also has storage spaces." 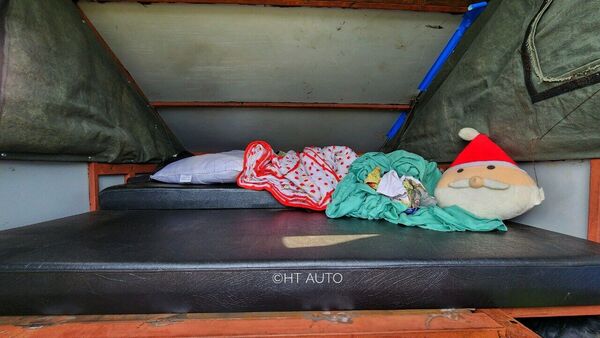 Sleigh out. Scorpio is in for Santa: The customized sleeping area retro-fitted on top of the Mahindra Scorpio where Haberer retires for rest and privacy.

Sustenance and some more

Conking off space may be a climb away but what does Haberer do when he gets famished? “I have a stove burner and I pick up essentials from any local shop. There is also a fridge inside that's powered by the same reserve battery."

Haberer's meals often come with a complimentary course of breathtaking views but once nature does come calling, he has a set plan as well. “There are times I walk into restaurants to make use of their facilities. But I carry a quick-pitch toilet tent as well," he explains, adding that because hygiene is quite important to him, he occasionally checks into a hotel or homestay to wash up and for laundry although his car is fitted with a 75-litre water tank. “I drink bottled water and the tank is specifically for washing purposes. I may get another tank for drinking water but the immediate plan is for a solar panel on the roof." 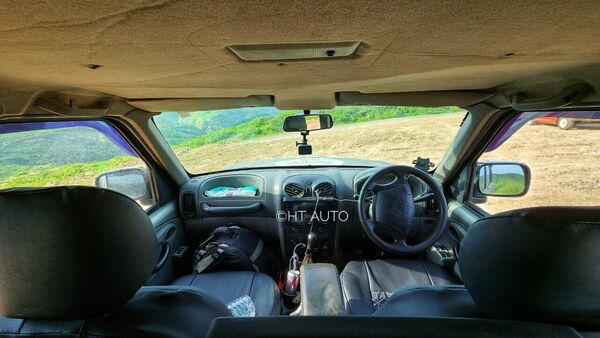 Haberer has his action cameras in place but also everything else that may be required over the course of a long roadtrip.

Solar panels, food, fuel and the car itself - everything has a purpose but nothing comes for free. And Haberer is well aware of it.

Haberer runs a software company and the head office is the 'ground floor' of the Scorpio. “I have plenty of charging points to power phones, laptop and more. I carry three sim cards for data. But this is also why I would eventually need that solar panel. Even on cloudy days, there can be enough to juice up all the electronics I have."

And the dimensions of the Scorpio allows him to cleverly plan everything he has or may get eventually. “I found the Scorpio in a yard sale and after one test drive, it chose me. I needed a big car because in India, the bigger the car, the easier it is to cross the road. I also needed an old car because it was my first driving experience in India. And I wanted a Mahindra because there's Mahindra everywhere and anyone can fix this car with parts widely available."

Haberer does carry emergency vehicle tools too so that he is ready with a contingency plan at all times but he says he has not had much trouble so far. 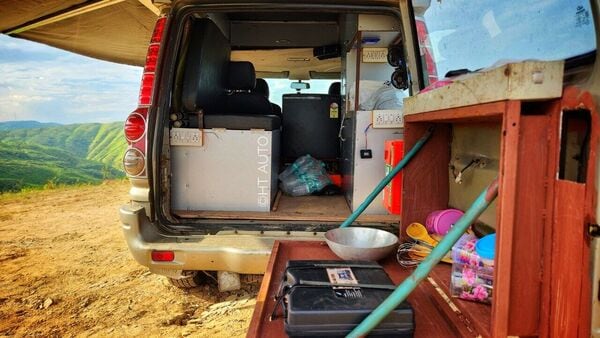 A seating area which doubles up as a stool to climb to the upper floor, a re-modelled cabinet to store portable gas stove with utensils, a medical box and even a fridge, this Scorpio is a fully-equipped 1BHK.

Dutch tadka to an Indian roadtrip

Haberer says he is only getting started. He drove out from Indore and towards Udaipur with plans of moving down the western coastline of the country before turning and moving up towards the eastern coastline. And there's purpose in his planning. “The winter months are coming and so, the southern parts of the country would be comfortable. Once summer approaches, you will find me in the north and north-eastern parts."

The weather, after all, can be a challenge for not just Haberer but for any vehicle which doubles up as a home in motion. So cities like Mumbai and Pune are next on the GPS system before entering the southern states. But through it all, Haberer's main driving force is to soak in the sights and sounds of wherever he may be at and documenting it on his Instagram channel called 'The Indian Roadtrip' so that others too can do what he's doing if they so choose to. “Long roadtrips and staying in the open in India can be different from the west but it is every bit as rewarding as anywhere," he signs off.