Police officials in Hong Kong bring 45 ultra expensive supercars to a halt.A number of Ferrari, Lamborghini and Porsche supercars were part of the fleet brought to a stop on suspicions of illegal racing and modifications.
By : HT Auto Desk
| Updated on: 25 Feb 2021, 11:06 AM 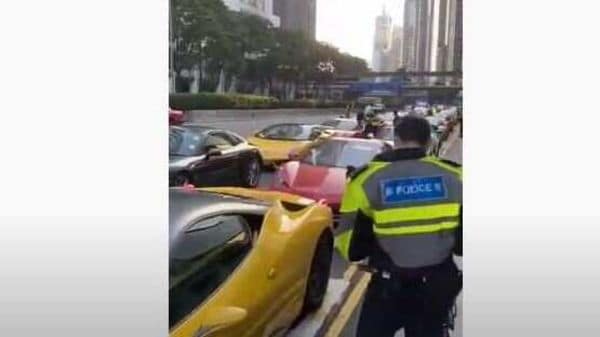 Screengrab from a video posted on Youtube by Dr. Tim.

Not even the Fast and Furious movie series may have had as many as 45 supercars all parked together by the roadside in any one particular scene. But reality may just be stranger than fiction, as was amply demonstrated recently in Hong Kong where nearly four dozen ultra powerful super cars were pulled over by local cops on suspicions that the drivers were indulging in illegal street racing and to inspect these vehicles for any possibly illegal modifications.

According to local reports, several residents near a busy expressway had raised objections to supercars zipping near here and creating a whole lot of engine noise. South China Morning Post reported that in a crackdown, local police officials intercepted 45 supercars and made the drivers parked these in a double-line row by the main street. The 'collection' included several Ferrari, Lamborghini and Porsche cars, among others.

The operation to intercept these vehicles was called 'Fossington' and most of the cars were eventually towed away after the early morning enforcement drive. "Officers found a number of cars were driving westbound at a high speed along the Island Eastern Corridor expressway. Subsequently, officers intercepted 45 private cars on Gloucester Road off the old Wan Chai police station," a police statement issued read.

The sight of all of these super expensive supercars was quite a sight for fellow motorists and pedestrians in the vicinity. Onlookers gaped in sheer amazement at the long line of these vehicles as police officials jotted down registration details and particulars of the drivers.

Some reports suggest that the number of street racing events being held illegal in Hong Kong saw a significant jump in 2020. This could also be because of lockdowns when public roads became far less congested than usual. Many cities in other parts of the world too had reported a spike in illegal road events during lockdown weeks and months.