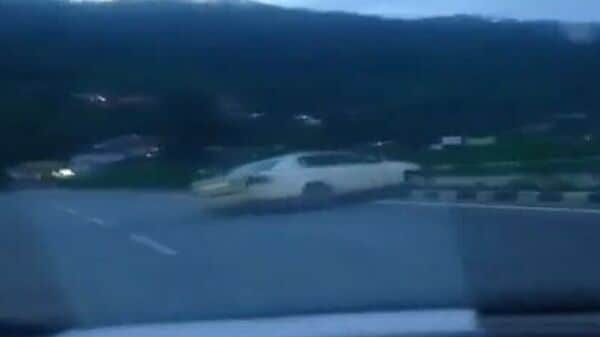 Screengrab from the video posted on Twitter by ANI.

Another video of rash driving along with an attempt to perform a stunt on a national highway has caught the attention of netizens. However, the entire drama did not go down well for the driver and the occupants as the car collided with a divider resulting in an accident and serving as yet another sorry example of why safe driving rules should never be sacrificed.

The incident took place on NH-5 in Solan, Himachal Pradesh and the individual who pulled off this stunt is a resident of Amritsar. The vehicle was damaged following the collision and the driver was safe. A case has been filed under the Section 279 of IPC in Dharampur Police Station, informed Solan Police said.

(Also read | Watch: Helmet saves this rider's head after it ends up under bus wheels )

One can observe from the video that an individual is speeding with one of the front doors open on the NH-5. After a few reckless turns, the driver of the white car lost control and hit a divider on the other lane of the National Highway. The car had a narrow escape from hitting the vehicles on the other lane.

The video received a lot of comments criticising the driver behaviour on a National Highway. One social media user said that due to these acts and drivers, other drivers on the road suffer and also die when these acts end up in a serious accident. While many condemned the driver for pulling off such an act, one went ahead to say that the individual tried to become Vin Diesel's character from Fast and Furious.