Home Auto News Waiting For Nissan Magnite Suv? Here Is Why Your Wait May Get Longer

Waiting for Nissan Magnite SUV? Here is why your wait may get longer

Nissan's production is likely to take a hit by almost a third of its target for October and November due to shortage of semiconductors.
By : HT Auto Desk
| Updated on: 22 Oct 2021, 11:01 AM 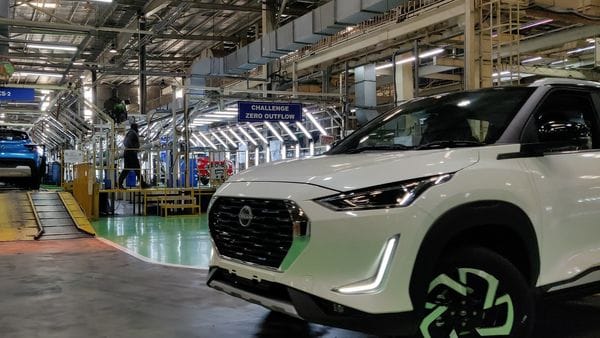 Nissan Magnite makes its way around the RNAIPL facility.

As the global chip crisis bites into production capacity of most of the carmakers, Nissan Motor has joined the bandwagon to announce a slash in vehicle production till November. The Japanese carmaker has said that it may reduce the number of vehicles planned to be produced till November to be down by almost a third across the world.

Nissan said that it planning to cut global production by 30% due to the ongoing shortage of semiconductors caused by the Covid-19 pandemic. According to Nikkei, the carmaker will build only 583,000 cars worldwide during the two-month period between October and November this year.

Nikkei quoted a Nissan spokesperson who said, “We acknowledge that the semiconductor supply shortage is still in a difficult situation." She also said that Nissan Motor will share an update on the production cut when it publishes report on its earning results in November.

Nissan in India has its manufacturing facility near Chennai, capital of Tamil Nadu. This is the facility where it manufactures two of the SUVs it currently sells in the country - the Magnite and Kicks. A global cut in production may impact its India operations too.

Nissan Magnite has been one of the best performing vehicles from the Japanese carmaker in India in recent times. However, due to rising demand, the waiting period for Magnite SUV has also gone up significantly. According to reports, the wait to get a new Magnite SUV goes up to as much as eight months in certain parts of the country.

Nissan's move comes a day after reports that French carmaker Renault too is likely to reduce its production capacity further across the world. Renault may cut down production to nearly half a million cars against 300,000 vehicles it had projected earlier. According to Reuters, three sources close to Renault have confirmed possibilities of a bigger hit the carmaker is likely to take in coming days.

Earlier this month, Toyota Motor also announced its plans to reduce output by 15 per cent in November. Toyota's production was also hit since September due to a slowdown at facilities of auto parts manufacturers in Malaysia and Vietnam.