Renault Kiger, Triber, Kwid production may go down soon. Here is why

The answer lies in the problem being faced by all carmakers across the world. It has led the French carmaker to drastically reduce its production capacity worldwide.
By : HT Auto Desk
| Written By : Sabyasachi Dasgupta
| Updated on: 21 Oct 2021, 04:08 PM 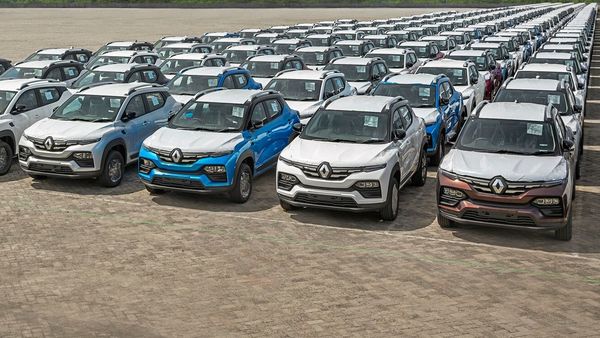 Renault Kiger SUVs seen waiting to be exported from India. The French carmaker is eyeing bigger production cut as chip shortage rumbles on.

French carmaker Renault is likely to further reduce its production capacity this year across the world. The carmaker had earlier said that it will forced to cut down production by at least 300,000 vehicles due to the ongoing shortage of semiconductor chips. However, latest reports claim that the carmaker is possibly looking at a bigger cut in production soon.

According to Reuters, three sources close to Renault have confirmed possibilities of a bigger hit the carmaker is likely to take in coming days. Renault, which will reveal its third-quarter results tomorrow, is expected to see more than a third of the 220,000 vehicles it has already reduced during its previous forecast revealed in early September. This could take the overall cut in production to nearly half a million cars.

"The forecasts change all the time, but the shortfall will be between 300,000 and 400,00 vehicles," one of the sources was quoted by Reuters. The figure is close to around 8 per cent of the total 3.75 million vehicles Renault sold during pre-pandemic days. The two other sources pegged the cut in production at a lower range between 350,000 and 380,000 cars.

Renault, which has been present in India for the last 10 years, produces cars like Kiger sub-compact SUV, Triber MPV and Kwid hatchback at its plant near Chennai, which it shares with Nissan Motor. Production at this facility may also take the hit in future due to the ongoing chip crisis.

The global chip crisis has hit almost every carmaker around the world. Several auto giants have been forced to cut down their production due to unavailability of supplies. Earlier this year, Renault Chief Executive Officer Luca de Meo had warned that the chip crisis is likely to continue well into the next year, a fear now corroborated by a lot of other carmakers too.

The shortage of automotive chips that began late last year as consumer demand for personal devices soared amid pandemic lockdowns has persisted through 2021.