Volkswagen stated that about 1,44,000 units of ID.3 electric vehicles have been ordered by the end of September.Volkswagen ID.3 EV has gained popularity in markets such as Germany, the United Kingdom, Ireland, Austria and Switzerland.
By : HT Auto Desk
| Updated on: 08 Oct 2021, 04:07 PM 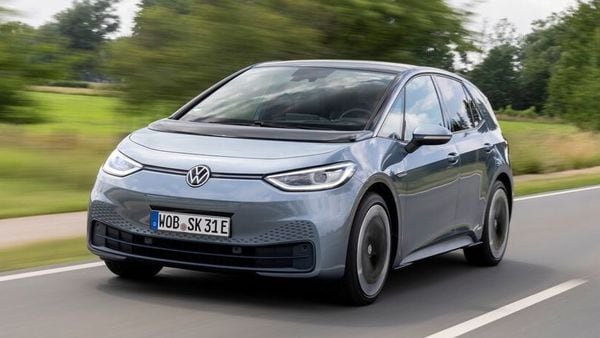 All-electric Volkswagen ID.3 will be soon launched in China.

The all-electric Volkswagen ID.3 has made quite an after its launch as the automaker said that it has registered a strong performance of the EV in terms of sales in the European market. Volkswagen said that about 1,44,000 units of ID.3 EVs were ordered by the end of September and about 50 per cent of these buyers have never driven a Volkswagen before.

Board member for Sales, Marketing and After Sales at Volkswagen, Klaus Zellmer, stated that the electric ID.3 is striking the intended chord with newer buyers. “It appeals to customers and has shot from zero to take top positions among new registrations in a large number of countries," he added. He also that the new electric vehicle has brought about 70,000 new customers to the company which reflects that Volkswagen is on the right track with its electric mobility strategy.

The Volkswagen ID.3 saw increased demand in markets such as Germany, the United Kingdom, Ireland, Austria and Switzerland. The brand conveyed that based on the new registrations, the ID.3 also ranked top in Western Europe overall in August. In a recently conducted survey by the automaker, it has been noted that buyers from Germany went for ID.3 models because of their environmental performance and innovative technology. Personal assistance provided by the brand’s dealer and service network was also one of the reasons for the model's popularity. For almost 80 per cent of German customers, the ID.3 is the most frequently used vehicle in their household, informed the company.

Volkswagen which has planned to launch the model in the Chinese market later this year has already started its production for the local market in Anting, China. The company also informed that the ratio of new customers for other Volkswagen models is around 36 per cent.