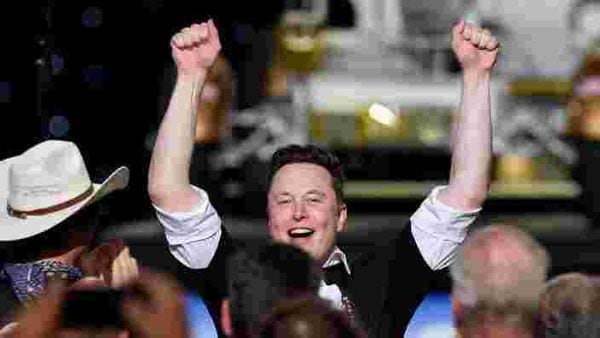 Tesla and SpaceX CEO Elon Musk celebrates with his brother Kimbal Musk (in hat) after the launch of a SpaceX Falcon 9 rocket and Crew Dragon spacecraft on NASA's SpaceX Demo-2 mission to the International Space Station.

Volkswagen AG Chief Executive Officer Herbert Diess evoked the historic rocket launch by rival Elon Musk to motivate top executives at the carmaker as they seek to overcome the auto industry’s biggest market slump in decades, according to people familiar with the matter.

Musk’s Space Exploration Technologies Corp. last week became the first private company to launch humans into space, and Diess told a gathering of the company’s top management that they should take inspiration from the achievement as the German manufacturer strives to massively expand its software operations while slashing expenses, said the people, who asked not to be identified as the meeting Thursday wasn’t public.

(Also read: 'No other country...': Tesla and SpaceX CEO Elon Musk heaps praise on US)

VW’s push to overcome the advantage held by Musk’s terrestrial venture, Tesla Inc., in electric car sales has run into difficulties beyond the virus-induced market downturn. Tesla overtook VW in market value earlier this year. Software problems have hampered the rollout of the Golf and the ID.3 hatchback, the two models that are critical for Diess to deliver on his plan to become the world’s leading electric-car maker.

Diess has referenced Musk’s achievements several times in the past. On the sidelines of the Golf’s world premiere last October he stressed that the success of Tesla’s Model 3 had catapulted the manufacturer out of a market niche and acknowledged the U.S. carmaker had a competitive edge in software. Since then the Covid-19 pandemic has jolted plans across the industry to roll out electric cars.

“We must significantly cut R&D expenditure, investments and fixed costs compared with the previous planning," German trade publication Automobilwoche quoted Diess as saying in a report published Saturday. VW’s cash buffer is set to decline until at least July due to weak demand, and some of the group’s brands might suffer a loss this year, Diess said at the management meeting, according to the report.

VW’s British Bentley marque mapped out a sweeping restructuring on Friday, including cutting about a quarter of its workforce.

A VW spokesman said by email there were general deliberations about what further cost measures could be taken to respond to the pandemic, but no concrete decisions have been made. He declined to elaborate further on the internal meeting.