Bentley has announced that further lay off, part of a voluntary release programme, cannot be ruled out in the future to reduce costs.
By : HT Auto Desk
| Updated on: 05 Jun 2020, 04:37 PM 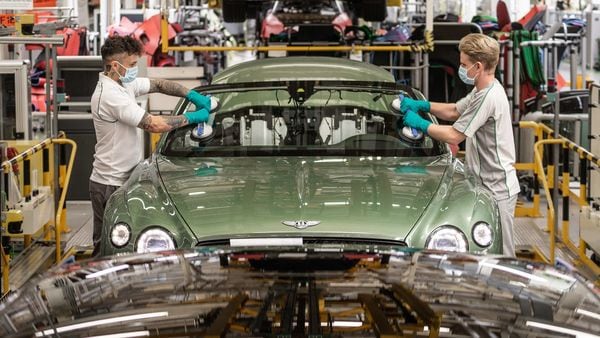 Bentley has said that the ongoing Covid-19 crisis has hastened its decision to lay off employees.

British luxury carmaker Bentley has announced that it will lay off around 1,000 workers in the UK as the company battles high cost amid the slowdown in the industry due to coronavirus.

Bentley roughly has around 4,200 workers in UK. The company said the layoffs are part of a voluntary release programme to reduce costs, which can be repeated in the future in case financial uncertainties continue to prevail.

A statement release by the company said, “Bentley is in the middle of a major change programme started in 2018, driving for consistent financial resilience through rapid productivity improvements across the business."

The luxury carmaker, like most other in Europe, has been struggling in recent times over the uncertainties regarding Brexit policy. The company said the layoff was actually hastened by the ongoing pandemic which has compounded problems for most carmakers in the region.

Recently, British luxury carmaker Aston Martin and French auto major Renault announced significant job cuts leading to more than 5,000 layoffs. Renault may further lay off 15,000 employees worldwide according to some reports. Renault's partner Nissan faced massive backlash over its decision to shut its pant in Barcelona. The plant and the nearby facilities employed 3,000 workers and the closures could indirectly affect up to 25,000 jobs.

Bentley saw profit lat year with global sales breaching 11,000 mark after it suffered heavy loss in 2018. The company expected to increase the margin of profit, hoping that 2020 would be better. But due to the Covid-19 pandemic, the company, like many others, have been forced to take some drastic steps.

The statement said, “Although organic growth was the planned solution for the remaining restructure challenge, this was clearly derailed by the impact of the pandemic. With this considerable forecast reduction to future revenues, Bentley has hastened plans carrying out a comprehensive review of its cost and investment structure and as the last resort, as with any organisation, the people costs and structure."

Bentley also announced that steps have been taken to cut or delay unnecessary spend without impacting future product plans. The company has also stopped all recruitment, contractors were released across all business areas, pay was frozen and up to 66% of employees at peak were placed on furlough.