Volkswagen will have to pay about 502 million euros in fine while BMW has been asked to pay nearly 373 million euros, as per the European Commission.Agreeing for a settlement with EU means that the carmakers admitted the charges in return for a lower fine.
By : Bloomberg
| Updated on: 08 Jul 2021, 16:05 PM

Volkswagen AG and BMW AG agreed to pay 875 million ($1 billion) in fines by the European Union for collusion that regulators said curbed the rollout of AdBlue emissions-cleaning technology.

VW must pay about 502 million euros and BMW will pay nearly 373 million euros, the European Commission said in an emailed statement on Thursday. The penalty for BMW is far below its initial provision of 1.4 billion euros. BMW did a U-turn in May in agreeing to settle the probe, after previously indicating it would fight the EU.

A settlement means companies agree to the EU’s charges in return for a lower fine and usually agree not to challenge the EU decision in court. Daimler AG avoided a fine for being the first to tell the EU about the cartel. All three companies could now face compensation lawsuits from customers.

The carmakers “possessed the technology to reduce harmful emissions beyond what was legally required under EU emission standards," Margrethe Vestager, the EU’s antitrust chief, said in the statement. “But they avoided" competing “on using this technology’s full potential."

The fines come as German automakers start to emerge from a pandemic that slashed car sales. Vestager has previously showed little sympathy for a diesel-cheating scandal that the “car industry brought upon itself."

The EU said the three carmakers struck a deal on AdBlue technology that adds urea to exhaust gases to reduce harmful nitrogen oxide emissions from diesel cars. The companies reached an agreement on AdBlue tank sizes and ranges and a “common understanding" on AdBlue consumption. 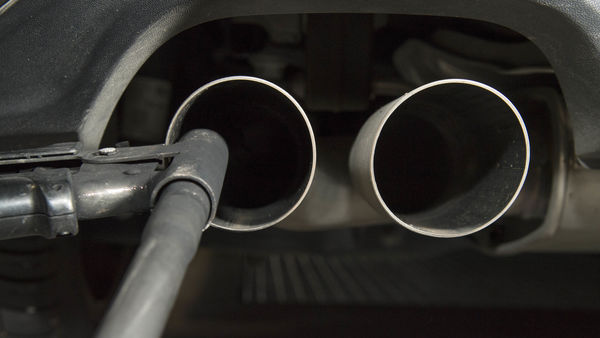 A hose for an emission test fixed in the exhaust pipe of a Volkswagen Golf 2,0 litre diesel car at the Technical Inspection Agency in Ludwigsburg, southwestern Germany. (File photo used for representational purpose) (AFP)

Swapping commercially sensitive information “removed the uncertainty about their future market conduct" and restricted competition for product features useful for customers. The EU said the conduct lasted from 2009 and 2014.

Volkswagen “cooperated fully" with regulators, it said in an email statement. The EU fines punish discussions “that were never implemented and customers were therefore never harmed," it said.

“The large fines imposed in this case underscore the need for more comprehensive practical guidance" on how companies can cooperate without risking a breach of antitrust law. Existing rules “no longer do justice to the complex challenges facing the automotive industry in particular in the area of necessary technical cooperations."

Volkswagen will consider an appeal before a mid-September deadline, it said, adding that regulators in China, South Korea and Turkey are also examining potential AdBlue collusion.

BMW said the EU had dropped allegations of joint development on software to restrict AdBlue dosing and efforts to curb a particle filter for direct-injection petrol engine. That lead to the lower fine, according to a company statement. BMW said the EU notice stated there’s no indication of collusion on the use of defeat devices to manipulate exhaust gas tests.

The EU case is the latest regulatory scandal for an industry that’s frequently tested the patience of authorities with emissions issues. VW is still dealing with the fallout of the so-called dieselgate affair, which has cost the company as much as 32 billion euros.