The electric buses, which comes with a range of 120 kilometres without the need to recharge, require nearly two hours to be fully charged.
By : HT Auto Desk
| Updated on: 29 Dec 2021, 12:44 PM 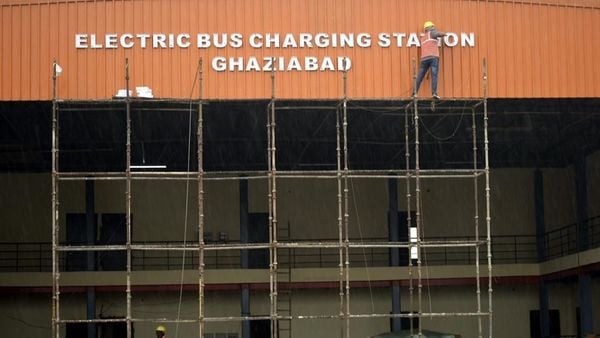 Construction work is underway for the electric bus station, in Ghaziabad on Tuesday. (Sakib Ali /HT)

AK Singh, regional manager of UP State Road Transport Corporation (UPSRTC), said, “The state urban development department has issued a communication in which they have set the tentative date to start the e-bus service on January 5, 2022. Ghaziabad will initially receive 15 e-buses, which will run on four designated routes. There is a charging station at Akbarpur-Behrampur in Vijay Nagar with 12 bays for charging."

The electric buses, which comes with a range of 120 kilometres without the need to recharge, require nearly two hours to be fully charged. The UPSRTC is setting up as many as 12 charging points to cater to the EV infrastructure needs for these buses. These charging bays will also have a double point charging facility, which will take just one hour to fully charge the batteries.

To operate these electric buses, Ghaziabad has set up its first state-run city transport service by the name of Ghaziabad City Transport Services Limited. It will be headed by Meerut commissioner Surendra Singh, and officers from the UPSRTC and the Ghaziabad municipal corporation (GMC). AK Singh has been appointed the chief executive officer of the entity.

Yogi Adityanath, Chief Minister of Uttar Pradesh, is likely to flag off the bus services virtually on January 5. The electric buses will cover a distance of 88 kilometres per trip. The first route over 33 kilometres (one side) will connect Anand Vihar to Muradnagar, the second 20km route from Anand Vihar to Raj Nagar’s ALT Centre, the third 20km route from Dilshad Garden to Govindpuram, and the fourth 15km route will connect various points from Tila Morh to New Bus Stand. While the minimum fare will be ₹10, the maximum fare for a ride in these buses has been fixed at ₹40 per passenger.