US President Joe Biden wants to replace vehicles in US government fleet with EVs. This is just one of many ways he plans to make EVs more popular.
By :
| Updated on: 29 Jan 2021, 08:13 AM 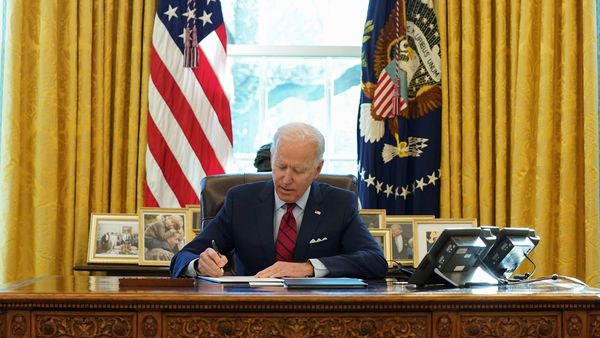 Joe Biden has been vocal about giving a push to electric mobility in the country.

The U.S. oil industry is seeking to forge an alliance with the nation's corn growers and biofuel producers to lobby against the Biden administration's push for electric vehicles, but is so far meeting a cool reception, according to multiple sources familiar with the discussions.

The effort to promote liquid fuels and combat expected federal subsidies for electric vehicles marks an unusual attempt by the petroleum industry to join with its long-time rivals, reflecting the scale of its concern over President Joe Biden's measures to combat climate change and tamp down fossil fuels.

While the oil industry and biofuels producers are competitors for space in America's gas tanks, they share a desire to ensure a future for internal combustion engines.

The effort also reflects the shifting political landscape in Washington. The oil industry's influence has waned since Biden replaced Donald Trump as president, but the farm belt remains a powerful political constituency.

The American Fuel and Petrochemical Manufacturers (AFPM), an oil refining trade group, confirmed it has been contacting state and national representatives of the corn and biofuel industries in recent weeks to seek support for a policy that would reduce the carbon intensity of transport fuels and block efforts to provide federal subsidies for electric vehicles.

That proposal would be an alternative to Biden's goal of electrifying the nation's vehicle fleet and would ensure a market for liquid fuels like gasoline and corn-based ethanol.

The refining sector has previously made attempts to find common ground with their biofuel rivals, but the latest efforts have taken on an added sense of urgency given the Biden agenda.

AFPM met in mid-January with some corn and biofuel industry lobbyists and some member refiners are hoping to host another meeting in February to discuss the future of liquid fuels.

"This whole idea was going to have to take a whole lot of time to gel, but we have made some progress," said Derrick Morgan, senior vice president at AFPM.

The industry's push to change the course of electric vehicle policy faces headwinds. California has announced a ban on internal combustion engines by 2035, other states are considering similar measures, and automaker General Motors on Thursday announced it will produce only electric vehicles by then.

Geoff Cooper, head of the Renewable Fuels Association, a leading biofuel industry trade group, confirmed RFA representatives were invited to participate in the February meeting, but said his organization had not yet decided whether to attend.

"We weren't born yesterday and we're not going to let the oil industry play us like a fiddle," he said. "They have a long history of pushing surrogates and proxies to the microphone to do their dirty work and we're not interested in that."

The National Corn Growers Association (NCGA) is also considering whether to send staff to the February discussion, according to two sources familiar with the matter.

NCGA Chief Executive Officer Jon Doggett told Reuters no such meeting had been scheduled, and distanced his group from the idea of an oil-corn alliance. "I have nothing to do with any refining groups. We haven't talked," he said.

Asked if any of its state-level member organizations were considering attending, Doggett replied, "We have dozens of groups. I can't know what all of them are planning."

Sources said the biofuel and corn industry is reluctant to join with the oil industry on this issue not just because of its longstanding rivalry with refiners, but also because it does not want to publicly oppose the energy policies of the new president.

The refining sector was influential under former President Donald Trump, who was keen to bolster the oil and gas industry.

However, Biden has entered the White House promising to restrain the oil industry, from pausing new drilling leases on public lands to contemplating tougher emission limits.

The U.S. Renewable Fuel Standard currently requires refiners to blend biofuels like ethanol into fuels. As a result, most gasoline sold in the United States has about 10% ethanol in it. The biofuel industry has been pushing hard to ensure those mandates continue.

Emily Skor, head of the biofuel group Growth Energy, said her group has no plans to collaborate with the oil industry.

"It's no surprise the oil industry all of a sudden wants to give us a bear hug. We produce lower carbon fuels. They don't," Skor said.