Home Auto News Two In One: The Mclaren 570gt Sport Pack Is Superfast And Precise

Two in one: The McLaren 570GT Sport Pack is superfast and precise

It represents the best of two worlds: It’s superfast and precise, and it offers real practicality for daytrips and weekend adventures.
By : Hannah Elliott, Bloomberg
| Updated on: 20 Mar 2018, 03:06 PM 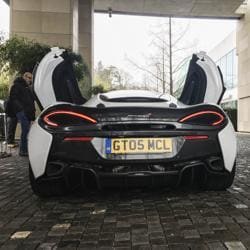 The 570GT Sport Pack is a good option for those who want a track-worthy McLaren they can use as a daily driver. Photographer: Hannah Elliott/Bloomberg

The current darling of McLaren enthusiasts is the 720S, a 710-horsepower spaceship of a car that costs $285,000 and drives like lightening.

But don't let the star power of the 720S blind you to another car in the British automaker's lineup that, all things considered, is more well-rounded and, quite possibly, may be more fun to own, too. (It's certainly easier to own.)

I'm talking about the McLaren 570GT Sport Pack. It represents the best of two worlds: It's superfast and precise, and it offers real practicality for daytrips and weekend adventures. Where the 720S is stiffer, longer, and essentially lacks any meaningful storage space, the 570GT Sport Pack is more generous. It won't rattle you to death on imperfect surfaces, it's easier to maneuver in parking lots and back alleys, and its footwells and back are more spacious. Not to mention that at $208,900, it's cheaper to buy and maintain.

This is the McLaren you want to drive further, and more often, than the others.

The best of both worlds

Here's how McLaren accomplished this feat. It started with the body of the original 570GT, which has luggage space and softer steering and suspension. (The GT, which stands for "grand touring," is the more convenient and comfortable model in the 570 line.) Then the automaker added the sharper handling dynamics of the 570S Coupe.

The resulting 570GT Sport Pack has a V8 engine that gets 562hp and 443 pound-feet of torque, the quick handling and eager power of the S, and the beautiful, leather touring deck and roomy, carbon fiber-framed rear glass hatch of the GT.

What's more, I took a poll of the valets and car photographers (carparazzi) at the Intercontinental Hotel in Geneva during the auto show earlier this month. The consensus: The 570GT Sport Pack was the best-looking among all the aforementioned McLarens, including the top-of-the-line 720S.

It has deep, swooped sides, a leering front smile rimmed by sly LED headlights, and a spoiler-topped rear end shaped like a rocket, all set on 10-spoke, superlight forged wheels with Pirelli P Zero Corsa rubber. Like the rest of the McLaren line, the 570GT Sport Pack looks like it rolled right out of a little kid's dream and onto the street.

When I got behind the wheel of a silica-white, right-hand-drive (you know, British style) 570GT Sport Pack in Geneva, I'd most recently driven the 720S. I was eager to see how this "lesser" car would compare.

Despite being cheaper, with 148 fewer horsepower and admittedly tamer—I'd argue, better—styling, the car was more of a treat to drive than the 720S. A common critique of McLaren is that it makes perfect-on-paper cars that lack soul. This one at least has more soul than some.

Its lightweight, carbon fiber monocoque shell weighs about as much as the average dude—and driving in it feels like flying. The narrow sport seats position you satisfyingly deep and recline slightly, so you feel like a pilot. The carbon-black leather steering wheel and black metallic components gleam like jewels. It comes standard with normal, sport, and track driving modes; stability control; front-nose lift; and glorious, twin-hinged dihedral doors that almost levitate as you open them.

The car accelerates from 0 to 62 mph in 3.4 seconds; its top speed is 204 mph. On Switzerland's smooth, wide roads, it required no effort to cruise at 100 mph—or to pass.

To me, preferring the 570GT over the 720S is like appreciating the beauty of Gisele (no one would argue the supermodel isn't alien-level stunning), but actually loving someone else.

This isn't to say the 570GT Sport Pack is perfect. It's not. McLaren's vertically oriented, central-control touchscreen and its associated systems aren't intuitive and remain overly complicated and slow. These challenges push the driver way past the point of general annoyance into the realm of distraction, frustration, and utter disbelief. They can seriously kill the buzz of excitement that comes with driving such a car.

And despite the GT styling, which offers a rear deck behind the two seats, perfect for holding coats and bags, there are no pockets or simple cutouts in the doors to hold cellphones or water bottles. The sole cup holder in the center console doesn't cut it, either. If this is supposed to be a car for touring, it should have places to put the things you take on tour—namely, coffee, water, a cellphone, or charging cords. This isn't too much to ask. And the gaping holes in the center bottom of sport seats don't help—they seem to attract iPhones and wallets with the gravitational pull of a black hole. Good luck fishing that stuff out.

Visibility is another issue in the 570GT Sport Pack, since the rear deck, when full of coats and luggage, blocks all sightlines directly behind the driver. The sloped, angled pillars in the center of the car block sightlines directly in front of and behind the shoulders at 2 o'clock and 4 o'clock. None of this is good when you're traveling at a fast clip down the highway.

These aren't deal breakers, but McLaren needs to focus on improving them. The brand's Sport Series line, which includes the 570GT Sport Pack, is responsible for more than 60 % of total sales. Based on my conversation with sales boss Jolyon Nash, these cars will continue to play a large part in McLaren's life.

As well they should. Where cars like the 720S and the recently announced $1 million Senna attract the hype, there's a reason the Sport Series line is doing so well. Versatile, thrilling cars such as the 570GT Sport Pack have broad appeal and are attracting new drivers to the brand.