A Nio EV plummeted after smashing through the building, instantly killing both test officials inside. Nio has invited social-media ire for hinting it may have been an accident and not a vehicle fault.
By : HT Auto Desk
| Updated on: 24 Jun 2022, 17:50 PM 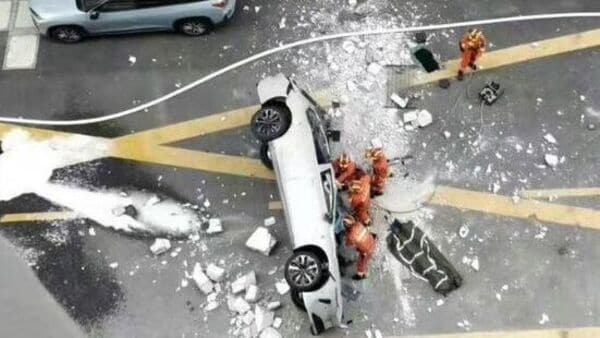 This image was posted on Chinese social-media site Weibo.

Two people were reportedly killed when a Nio electric vehicle (EV) being tested fell off the third floor of the company headquarter in Shanghai. Nio is a Chinese EV brand that offers a number of battery-powered model and the company confirmed that both who died were inside the EV when it plummeted.

Local reports highlight that both persons killed in the incident were test officials and that both died immediately upon impact when the EV crashed out of a building and fell towards the ground. Nio has reportedly started an investigation and has said it is co-operating with investigating officials. “Our company has collaborated with public security department to launch the investigation and analysis of the cause of the accident," the statement read. “We feel very sad about this accident and would like to express our deepest condolences to our colleague and partner employee who lost their lives. A team has been set up to help the families."

The company further said that initial investigations point to the incident being an accident, hinting that the crash may not have been caused by the test vehicle. This has invited a furious response from social-media users in China after the message was put out on Chinese social-media app Weibo. Many have asked for an independent investigation into the incident rather than one being contributed  to - and possibly influenced - by Nio.

Nio is a prominent player in the Cinese EV ecosystem and is one of the key local players in the world's largest EV market. It is also considered as one of the main rivals to Elon- Musk-led Tesla.