Toyota's next launch for the Indian market is the new Urban Cruiser Hyryder but recently a test mule of Yaris Cross was spotted in Gurugram, Delhi. This is where Maruti tests its upcoming vehicles and components. Toyota and Maruti Suzuki have entered into a partnership and have been developing products together. The SUV was fully covered with black camouflage. It is not known what Toyota Yaris was doing on Indian roads. However, it should be safe to assume that the SUV was here for component testing.

It is not the first time that the Yaris Cross has been spotted on Indian roads. It is very unlikely that Toyota launches the Yaris Cross in India. The reason behind this is the SUV measures almost 4.2 metres and the Japanese manufacturer has already unveiled its new mid-size SUV, the Urban Cruiser Hyryder which will launch soon. It makes no sense for the manufacturer to launch two mid-size SUVs in the same segment. 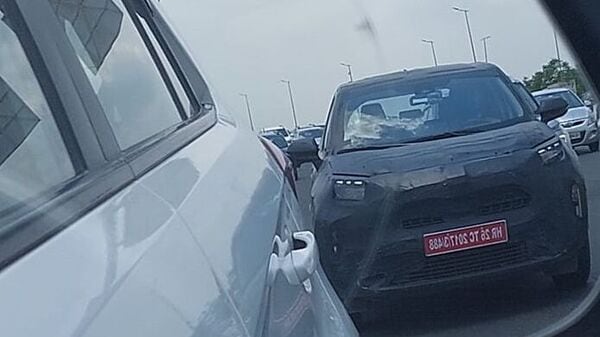 The Yaris Cross is a SUV that measures 4.2 metres. (Photo Courtesy: Facebook/Amit Thanai)

It is important to note that the Yaris Cross is not the rugged version of the Yaris that was sold in the Indian market. Since then, Toyota has pulled the plug on Yaris which was a mid-size sedan. In the international market, the Yaris is sold as a hatchback and a crossover SUV. The hatchback is called Yaris whereas the SUV version is called Yaris Cross. In terms of design both the vehicles look very different.

In the global market, the Yaris Cross is offered with a 1.5-litre, three-cylinder petrol engine and an electric motor is mated to it. The engine is capable of producing 91 hp of max power and 120 Nm of peak torque. However, with the help of an electric motor, the total power output is rated at 116 hp. It comes mated to a CVT automatic transmission.