Toyota's new driving assist technology features a level 2 autonomous system.This helps in limiting the car in its lane, maintaining the distance from other vehicles and changing lanes under the driver's supervision on expressways.
By : Reuters
| Updated on: 08 Apr 2021, 12:54 PM 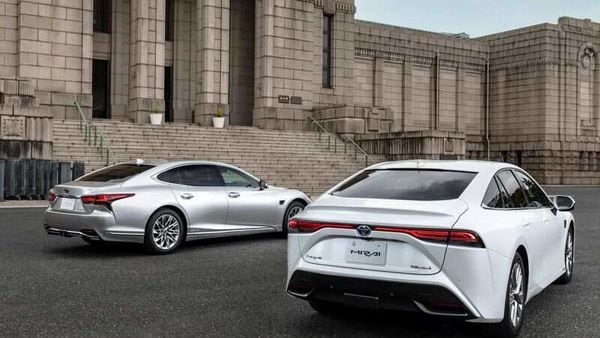 Lexus LS and Toyota Mirai cars in front of the Meiji Memorial Picture Gallery in Shinjuku, Tokyo in this undated handout photo. Toyota/Handout via REUTERS

Toyota Motor Corp unveiled on Thursday new models of Lexus and Mirai in Japan, equipped with advanced driver assistance, as competition heats up to develop more self-driving and connected cars.

The Japanese carmaker's new driving assist technology, or Advanced Drive, features a level 2 autonomous system that helps driving, such as limiting the car in its lane, maintaining the distance from other vehicles and changing lanes under the driver's supervision on expressways or other motor-vehicle only roads.

The luxury sedan Lexus LS will be on sale from Thursday, costing between about 16.3 million yen ($148,627.70) and 17.9 million yen, while the second-generation Mirai hydrogen fuel cell car will be offered on April 12 at between 8.4 million and 8.6 million yen.

"This is really an important first step in our journey towards software-first development," he said at an online briefing on Thursday, adding that the company has tried to design the software to be truly global and to provide re-usability.

In the future, software features on cars will be "upgradable" and "more customisable" much like how people personalise their smartphones, Kuffner added.

Fully self-driven cars are still likely to be years away, but rival General Motors Co early this year made a splash at the virtual Consumer Electronics Show with a fully-autonomous all-electric flying Cadillac concept, while Chinese search engine operator Baidu unveiled a partnership with local car brand Geely.