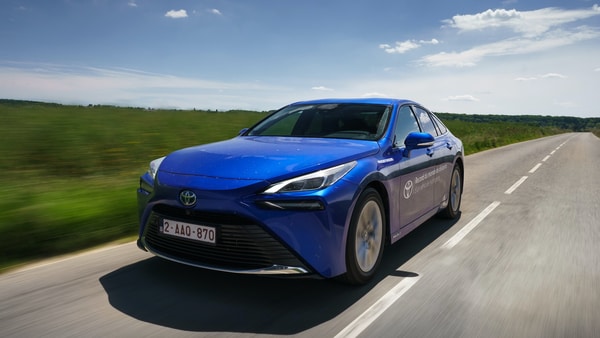 An under-production Toyota Mirai model has set a new record for the longest journey covered on a single tank of zero-emission hydrogen. The Mirai model was driven by a team of 4 drivers and covered a 1,000-kilometer loop from Paris on a single charge of hydrogen.

The 1,003 kilometers were covered on a mainly road trip, south of Paris, in Loir-et-Cher and Indre-et-Loire. he average hydrogen consumption for the entire trip was limited to 0.55 grams per km.

It also recorded a mileage of 9 km during the record run. The three tanks of the Mirai can hold 5.6 kg of hydrogen. Toyota said that the hydrogen used for this record was completely green, zero emissions from its production to its use in the Mirai.

Among the four drivers of the Mirai model was Victorien Erussard, founder and captain of the first zero-emission hydrogen ship sailing around the world. After achieving the world record feat he said, "I am very happy to have taken on this 1,000 km challenge behind the wheel of the all-new Mirai! Toyota is always at the forefront of hydrogen innovation and our collaboration has only grown stronger year after year. As a former offshore racer, I need to take up challenges and I warmly thank Frank Marotte and his teams for taking me on this zero-emission adventure which shows that nothing is impossible and that hydrogen mobility d 'today is here!"

Frank Marotte, Chairman and CEO of Toyota France, said, "It is a fabulous challenge that we have succeeded with the new Mirai. Internally, it is the Start Your Impossible spirit , surpassing oneself, that drives us and we have demonstrated it again today."

Earlier this month, a new world record for the longest journey covered on a single tank of zero-emission hydrogen was set by a Hyundai Nexo car. The Hyundai vehicle covered a distance of 887.5 kilometres travelling between the cities of Melbourne and Broken Hill in Australia. The non-stop journey had lasted 13 hours and 6 minutes in all, and was made at an average speed of 66.9 kilometres per hour.