Home Auto News Thousands Of Tourist Vehicles Turned Back From Mussoorie. Here's Why

Thousands of tourist vehicles turned back from Mussoorie. Here's why 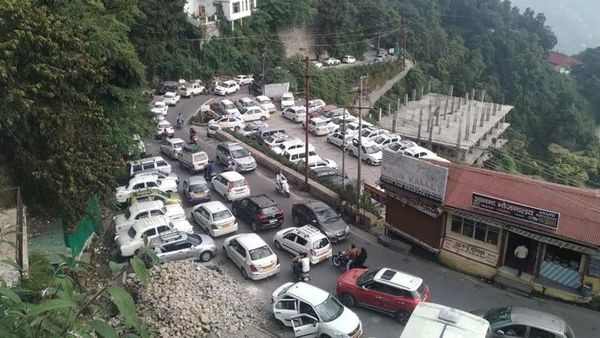 Long queues of tourist vehicles in Mussoorie on Saturday.

As many as 2,000 vehicles that were on their way to Mussoorie, were sent back by the Uttarakhand police on Saturday, Hindustan Times' sister publication Live Hindustan reported. This was done after the state government announced strict protocols to prevent the tourist destination from being overcrowded amid the ongoing coronavirus pandemic.

As a part of a special drive, the police put up barricades on the main Dehradun-Mussoorie road so as to stop and check vehicles trying to enter Mussoorie. It was stated a day before that additional checkpoints have been set up at the Kuthal gate and Kimadi areas that are on the route to Mussoorie. The figure of 2,000 vehicles is as reported till 5pm on Saturday.

The tourists entering the hill station have been asked to carry a negative Covid-19 test report not older than 72 hours. Those entering Nainital from outside Uttarakhand have also been asked to procure the same. People trying to enter these places without the valid documents are being returned.

A three-kilometre-long traffic jam was seen choking the streets of Mussoorie on Saturday as thousands of people decided to enter the place to spend some leisure time. Recently, a viral video showed several maskless tourists bathing at Mussoorie's famous Kempty Falls as social distancing went for a toss.

Popular hill stations such as Shimla, Mussoorie, Kufri, Narkanda, Dalhousie and Manali are witnessing tourist influx in large numbers as people from plains are looking to get rid of the scorching heat. A dip in Covid cases in the country has also contributed to this sudden tourist influx at hill stations.