The EasyMile buses operate on an experimental basis in several cities in the United States.
By : HT Auto Desk
| Updated on: 19 May 2020, 11:26 AM 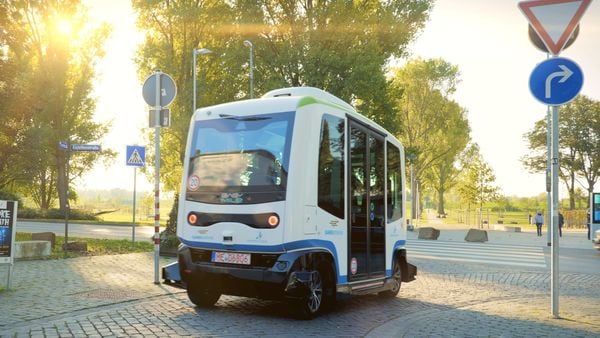 The move to introduce seat belts comes after an incident in which a passenger fell from the seat during a sudden stop in Ohio, United States. (Photo courtesy: Twitter/@Easy_Mile)

French autonomous vehicle company EasyMile has decided to add seat belts to its self-driving buses after an incident in which a passenger fell from seat during a sudden stop in Ohio, United States. The step has been taken to be able to transport passengers again in the USA EasyMile buses, which was suspended by the National Road Safety Administration (NHTSA) in late February after the incident.

The EasyMile buses operate on an experimental basis in several cities in the United States.

The company has also decided to have more signage and audio ads that alert passengers to the possibility of sudden stops, and the company says it will train security operators on buses to remind passengers to hold their feet firmly on the ground while on the move.

The company also said that the newly added seat belts are not mandatory for passengers. In a statement, EasyMile said, "Although they are not standard in conventional public transport, in an effort to continue to offer the benefits of this new technology in the safest and most acceptable way possible, we are also adding seat belts to our American buses."

However, local operators across the country that use EasyMile buses may not start transporting passengers immediately, as the Covid-19 pandemic has reached the number of public transport passengers and raised concerns about shared spaces. EasyMile says its transportation services in the United States "will start progressively" as local public health orders allow and update vehicles with seat belts and other changes.

The US road safety watchdog had ordered EasyMile to suspend its buses in late February after one of its shuttles made an emergency stop when it pulled away from an intersection. The company said that an internal safety mechanism was triggered, activating, as scheduled, a sudden stop of the bus at 11 miles per hour, but said it was less abrupt than the braking that can happen in subways or trams.

It was one of NHTSA's first interventions in an autonomous vehicle project like this, as the agency made a decision without an intervention approach to testing and implementing the technology.