This minivan is more TV, less minivan. Check out home theater on wheels

The second-row occupants of the Buick GL8 Century minivan can enjoy a private screening thanks to the ingenious foldable smart screen that can be raised with a tap of the center armrest.
By : HT Auto Desk
| Updated on: 02 Jun 2022, 02:37 PM 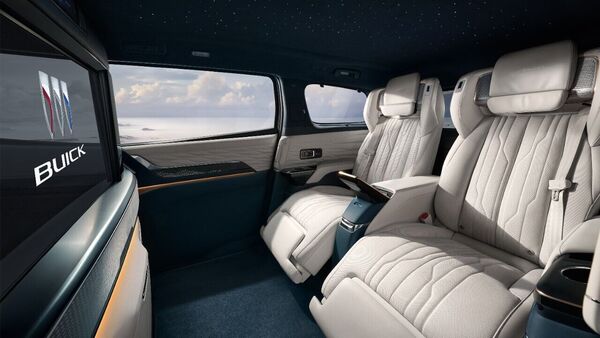 Elevating the home-theatre feel, the wraparound seats in the second row of Buick GL8 Century are extra-spacious, wider and more comfortable.

With a show of commitment for the Chinese market, Buick recently revealed the GL8 Century minivan, especially made for the Chinese market. With proportions of 5,230 mm in length, 1,980 mm in width and 1,867 mm in height, the MPV gets sleek proportions and quite roomy interior, allowing it to double up as a home theatre on wheels. The second-row occupants can enjoy a private screening thanks to the ingenious foldable smart screen that can be raised with a tap of the center armrest and be used for smart projection.

Elevating the home-theatre feel, the wraparound seats in the second row are extra-spacious, wider and more comfortable. Its headrests feature exclusive built-in Bose sound system for an immersive audio experience just that that in a concert hall. The ambience is supported by the starry roof, and can be experienced while on the move. The two-tone paint of the Buick GL8 Century MPV hints at the fact that the the vehicle is meant for the luxury-seeking customer,

The exterior of the MPV comes in two-tone theme, heightening the impact of its commanding presence. The grille of the Buick GL8 Century minivan stretches almost up to the hood and is paired with a set of distinctive arrow-shaped headlights, lending it the dynamic look that is naturally associated with MPVs. The two-tone paint also hints at the fact that the Century is meant for the luxury-seeking customer, something that becomes even more obvious once enters inside the MPV.

And even when one is not particularly in a mood to watch a screening, the wide chair seats in the second-row are good enough to simply relax while being chauffeured around. Buick's luxurious GL8 Century minivan joins the GL8 ES and GL8 Legacy to reinforce the brand's leading position in China's MPV segment, and is set to go on sale later this year. The Buick GL8 Century is set to become the brand's new flagship variant for the GL8 MPV nameplate.