This Jeep Wagoneer's lettering is not your usual badge

A picture of the rear of a Jeep Wagoneer has surfaced on the internet that shows the lettering of the badge unaligned.Stellantis shared that the issue has been addressed before the deliveries began.
By : HT Auto Desk
| Updated on: 25 Dec 2021, 12:59 PM 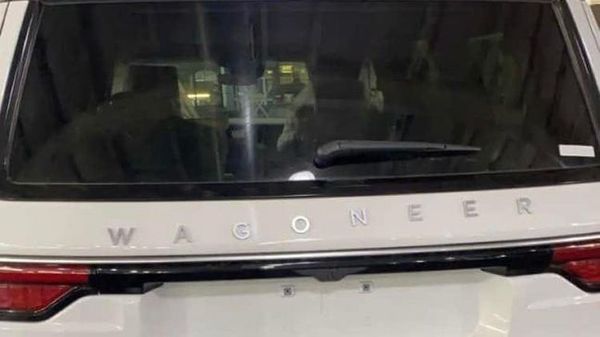 The rear of the car shows the unaligned lettering of the Wagoneer SUV.

A badge/logo is one of the important identity features of a vehicle and if it is not properly placed or aligned, it can make the vehicle look weird. Something like this happened when a picture of a Jeep Wagoneer surfaced on social media where one can clearly observe that the badge of the car is out of position, at an odd angle.

The picture has been posted on Twitter that shows the rear of a Jeep Wagoneer whose badge lettering went haywire. According to a report by Jalopnik, the picture was taken at Stellantis’ Warren Truck assembly plant during a pre-delivery inspection. It is unclear as to how this could have happened as automakers use jigs to ensure that badges of vehicles are placed correctly while in the process of production.

Is quality control a @Jeep thing I don’t understand? pic.twitter.com/JeJsGmodih

The report also mentioned that after reaching out to Stellantis regarding the issue, the company informed that this issue came to light while the SUV was being launched and steps were taken immediately to rectify it. This problem has been resolved before the customers got their car, shared the brand.

A PR representative from Jeep said that earlier during the launch of the Wagoneer SUV, Warren Truck did experience some issues with badge alignment. However, these issues were addressed at the factory before any vehicles were shipped to owners. This included the model in the shared picture. “As a permanent solution, hand-applied locating fixtures, as well as machine vision systems, were installed to verify badge alignment. The plant has a robust vehicle audit process that ensures every vehicle leaving the plant reflects the premium quality of the brand," the PR was reportedly quoted.