A Ferrari F12tdf crashed against a concrete barrier in Japan following which its damaged front fenders were stuck together with help of duct tape.Reportedly, no one has been injured in the accident.
By : HT Auto Desk
| Updated on: 05 Jan 2022, 09:50 AM 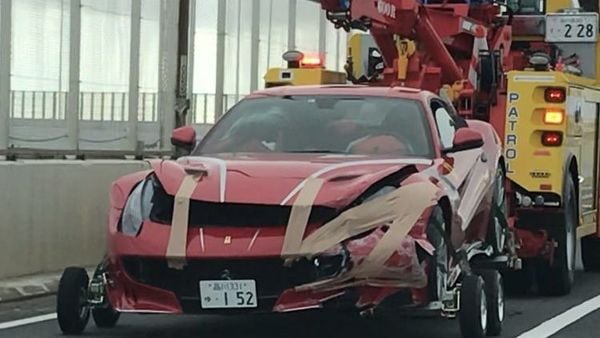 It is being suspected that the driver might have lost control over the car which led to a crash against a concrete barrier.

The last day of 2021 did not turn out to be lucky for a Ferrari F12tdf supercar that met with a grievous accident. A picture of the supercar shared on a social media platform showed the car being transported after being wrapped in duct tape to stick together its deformed front face.

The accident took place in Japan at the Shibaura junction in the direction of the Rainbow Bridge, stated a report by Carscoops. It is being said that no other car or vehicle was involved in the accident, hence one might guess that the owner of the supercar was responsible for the crash. It is being suspected that the driver might have lost control over the car which led to a crash against a concrete barrier. There has been no report of any serious injuries or fatalities.

From the picture that is being circulated on the social media platforms, one can guess that the supercar will need a new front bumper, front fenders, bonnet and a few parts of the V12 engine that might have been affected due to the impact. It might also need new airbags.

The limited-edition Ferrari F12tdf was introduced in 2015 as a powerful track-focused variant of the F12berlinetta. It comes with a naturally aspirated 6.3-liter V12 engine under its hood that has the ability to generate a power output of 769 hp and a peak torque of 705 Nm. Its seven-speed dual-clutch gearbox powers the rear wheels of the supercar. The supercar has extensively redesigned aerodynamics along with a sophisticated rear-wheel steering system. It also offers larger brakes with one-piece brake callipers that have been borrowed from the La Ferrari. The company sold around 799 units of this model from 2015 to 2017.