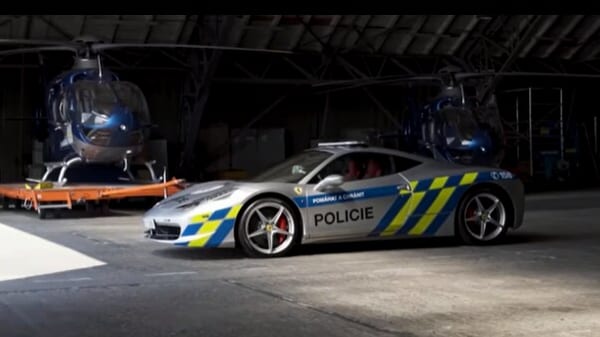 Have you ever wondered what happens to the vehicles that are confiscated from criminals who have a knack for buying luxurious and powerful cars out of their ill-gotten wealth? The Police of the Czech Republic knows exactly what should be done with a Ferrari 458 Italia sports car that it got its hands on. Officials could have destroyed the Italian supercar, just like what police in Philippines does with its confiscated smuggled cars. But the Czech police department turned the confiscated 458 Italia into a police service vehicle.

The confiscated Ferrari has been converted for the police services in the European country. It will serve under the Czech Republic's Special Surveillance Department with nationwide jurisdiction and will be driven only by specially trained police officers. The vehicle will be used in aggressive pursuits against drivers on Czech highways, when chasing stolen vehicles. It will also be used during surveillance at the locations of reported tuning events.

To convert the confiscated Ferrari vehicle, the Czech police department had to spend CZK 340,000 or around $14,000 with the current exchange rates, equal to the price of the new Skoda Scala, as per a press release issued by the police department. The stated amount comes on top of the CZK 130,000 spent to get the vehicle running as it was stored for 10 years. The vehicle had clocked approximately 2,000 kilometers at the time of being captured from the criminal.

To deploy the Ferrari in the police fleet, the Czech Police department started by changing the livery and paint. The 458 Italia also received a new livery, a camera system, a radio, a special warning light, and an inscription display. It will also come with a speed gun as part of its equipment.

In 2021, the Czech government seized almost 900 vehicles with most of these being sold, with the proceeds being used to cover the damage caused by the offender.