Home Auto News The Beast May Be Electric! Us President Joe Biden May Consider Limo Ev

The Beast may be electric! US President Joe Biden may consider Limo EV

The Beast, also called Cadillac One, is the official limousine of the US President. It weighs over 9,000 kilos, runs on diesel and has a mileage of around 3 kms to a litre.Joe Biden is a vocal supporter of EVs and has reportedly confirmed he would want an electric limo.
By : HT Auto Desk
| Updated on: 23 May 2021, 09:15 AM 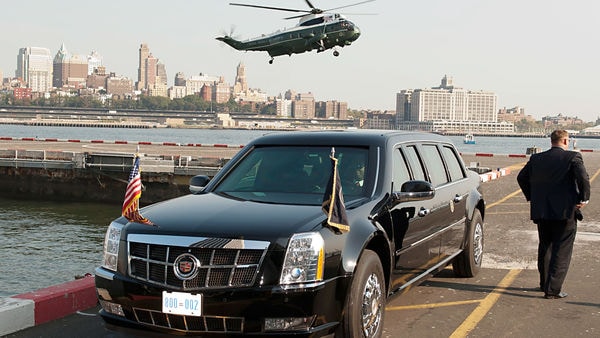 File photo of the presidential limousine that is the land transport option of choice for US Presidents.

The Beast is perhaps the most recognized presidential vehicle anywhere in the world and has been responsible for the safety of US Presidents for years and years. This fortress of wheel is the ultimate limousine which packs in top-notch safety features and is equipped to handle threats with panache and deal with emergencies like a pro. And yet, at a time when the world is moving towards electric mobility for a cleaner future, The Beast is quite the fuel guzzler. This may soon change as reports suggest US President Joe Biden has taken it upon himself to ensure his go-to vehicle is powered by batteries in the future.

Biden is an automotive enthusiast and the 78-year-old was recently seen taking Ford's latest EV - F-150 Lightning - for a spin. He has also been vocal about the need to increase focus on battery-powered vehicles and has previously said that vehicles in use by the US government should shift towards battery power. In fact, his win to gain entry to the White House last year has led to stocks of EV makers rising significantly.

US media outlets have now quoted White House Press Secretary Jen Psaki, in response to a question, confirm that Biden is in favour of an electric presidential limousine. "That's certainly something the President has talked about and is an objective for him," she reportedly said.

An electric beast? On AF1, WH press secretary Jen Psaki was asked if President Biden will electrify the WH vehicle fleet, including the presidential limo known as "the Beast." She said: "That's certainly something the President has talked about and is an objective for him."

While it is not known if the existing limousine would eventually be retrofitted as an EV or if a completely new limousine - running on battery power - will have to take up the responsibility to transport a man often referred to as the world's most powerful. If it is the former, it could be a monumental task because the existing Beast weighs more than 9,000 kilos! Also called Cadillac One, the vehicle runs on diesel and has a paltry mileage of just 3 kilometres to every litre of the fuel. Would any battery pack(s) be able to give it the performance capabilities to drive out the president in case of an emergency? What would be the range of such a vehicle? And what about charging complexities in case Biden travels to a foreign country with limited EV resources?

Even still, converting The Beast to an EV may not be as complicated as solving climate crisis or brokering world peace and appears quite inevitable.