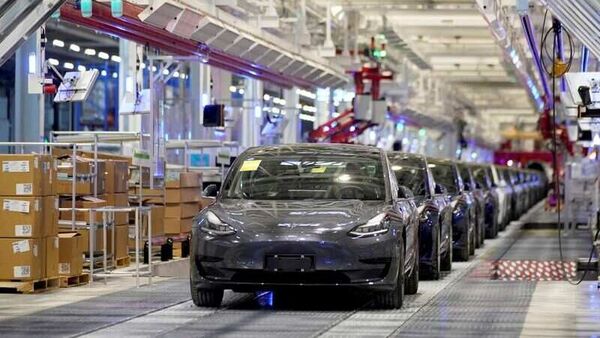 US EV giant Tesla's run of record quarterly deliveries of nearly two years could come to end due to the effects of prolonged coronavirus pandemic in China's Shanghai that hit the automaker's production and supply chain. This also raised questions over Tesla's increased reliance over China. The EV maker has been grappling with production glitches in China and slow output growth at its new factories in Texas and Berlin.

As per analysts' estimates, Tesla is expected to report deliveries of 295,078 vehicles for the second quarter while some have further slashed their estimates to about 250,000 due to China's prolonged lockdown. If true, this figure would be down from Tesla's record deliveries of 310,048 in the preceding quarter, marking Tesla's first quarter-on-quarter decline in deliveries since the first quarter of 2020.

Since the third quarter of 2020, Tesla has posted record deliveries every quarter, weathering pandemic and supply-chain disruptions better than most automakers. China has been the hub for Tesla, instrumental in its rapid increase of vehicle production.

However, the country's prolonged zero-Covid lockdown has caused significant disruptions to Tesla's output, much more than CEO Elon Musk had predicted. The Shanghai factory produced roughly half of the company's total cars delivered last year, and the current analyst estimate is that the shutdown has wiped out about 70,000 units in the quarter.

In April, Musk had estimated that Tesla's overall vehicle production in the second quarter would be "roughly on par" with the first quarter, however, in a recent mail to employees, he said that the company had "very tough quarter," citing production and supply-chain challenges in China.

The EV maker's new factories in Texas and Berlin are also losing billions of dollars as they struggle to increase production quickly given the ongoing supply chain woes that are giving the company a tough time.