The beer bottle revealed by Tesla CEO Elon Musk looks angular and prismatic, clearly drawing design cues from the Tesla Cybertruck.Apart from launching a beer for its Berlin factory employees, the automaker is also planning to build a train station at the factory.
By : HT Auto Desk
| Updated on: 13 Oct 2021, 11:21 AM 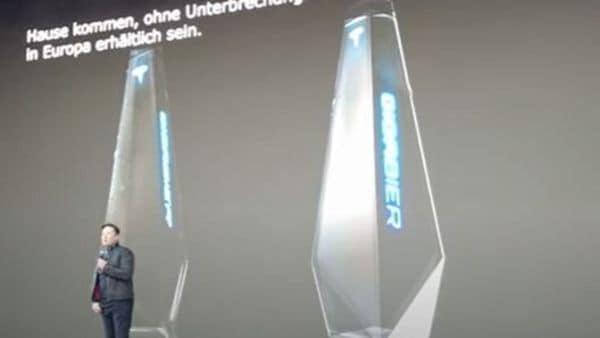 Tesla CEO Elon Musk recently announced that the EV company will be selling its own beer, called ‘Gigabeer’ at its Berlin Gigafactory. The Tesla beer will come in a bottle that seems to be inspired by the Tesla Cybertruck model with its unique outer design.

The beer bottle revealed by Musk at Tesla's Berlin Gigafest event held last weekend looks angular and prismatic, clearly drawing design cues from the Cybertruck. The bottle features a text on one side that reads, ‘GigaBier’.

Tesla's Berlin Gigafactory which is expected to start producing vehicles as early as next month is expected to employ nearly 10,000 people. The EV giant aims to make life easier and more fun for its employees at the Gigafactory Berlin and as it is well known that Germans prefer drinking beer with lunch, Tesla's decision to launch a ‘Gigabeer’ seems to be well thought out.

This is not the first time the EV company is launching an alcoholic beverage under its brand name. Last year, the company launched its own Tequila in a lighting shaped bottle which was priced at $250 for a bottle and was sold only in the US. It was delivered only to the states that allow delivery of alcohol.

Apart from launching a beer for its Berlin factory employees, the automaker is also planning to build a train station at the factory so make it easier for the workers to commute. Next, there is also a plan to cover the factory walls with street art.

The Tesla Giga Berlin is only waiting for final approvals to begin operations due to various legal challenges, especially due to the concerns raised by environmental activists. Once operations start, Tesla will manufacture Model Y electric sedans in November or December this year. Tesla has targets of making between 5,000 and 10,000 electric vehicles vehicles every week at the factory by the end of next year.

(with inputs from Electrek)