The Tesla Model 3 owner hit the limelight with her protest at the auto event complaining about brake-related issues in her car.
By : HT Auto Desk
| Updated on: 08 May 2021, 10:00 AM 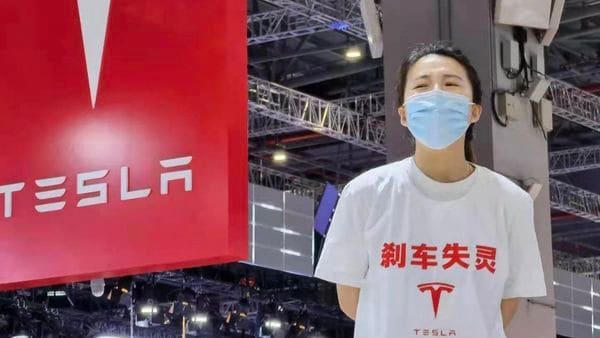 The Tesla owner, wearing a t-shirt that reads Brake Lost Control, was dragged away from the venue and detained for five days for her protest during the Shanghai Auto Show.

Tesla in China finds itself in a corner again after the Chinese owner, whose protest at the recently concluded Shanghai Auto Show went viral, has sued the US-based electric vehicle manufacturer for faulty brake issues.

The Tesla Model 3 owner has sued the EV maker of RMB 50,000 (roughly converted to around ₹5.70 lakh) for 'mental anguish and emotional distress'. She had complained that Tesla did not her even after complaining about the issues in her Model 3 car which had crashed. She even claimed that her father could have lost his life in the accident.

The protester was seen on top of a Tesla Model 3 car at the auto event, wearing a t-shirt that read 'The brakes don't work' while the security tried to pull her down. She was later dragged away from the event and was detained for five days for her protest.

Tesla, on its part, had earlier dismissed the protest calling her a 'widely known' troublemaker and claimed that her car did not have any issues. This move was one of the reasons the Tesla owner decided to sue the company. For her, Tesla had publicly made false statements that were made out of the blue and violated the facts in order to create a negative image of the owner.

The incident snowballed into a controversy that Tesla found too hot to handle and had to finally take a step back and apologise. Tesla issued a statement after a massive backlash and offered full cooperation with the owners who have issued with their cars. "In order to make up for the discomfort of the owner as much as possible and the negative impact on her car using experience and life, we are always willing to try our best to actively communicate with her and seek solutions with the most sincere attitude," it said.

Later, the carmaker agreed to share crash data with the owner after pressure from authorities in China.