Tesla, Samsung likely to develop the next Autopilot chip for Cybertruck

Once ready, the chip developed by Tesla and Samsung will use it in Cybertruck, which will come with the full Self-Driving mode, as early as next year.
By : HT Auto Desk
| Updated on: 24 Sep 2021, 05:08 PM 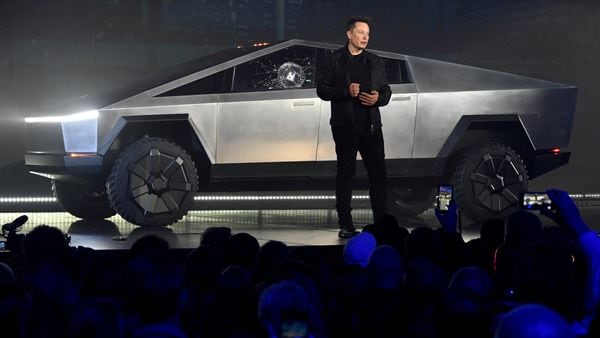 Tesla and Samsung are likely to join hands for the production of a next-generation self-driving chip that allows the brand's cars to have a 100% autonomous driving system. According to reports in the Korean media, Samsung has defeated TSMC and won the order for Tesla’s self-driving chip HW 4.0.

The report, published in Korea Economic Daily, say that the negotiation with Samsung is in the final stage and that “it is practically a completed deal (…) Samsung Electronics plans to mass produce the Tesla HW 4.0 chip at its main factory in Hwasung, South Korea , using seven-nanometer processing technology in the last quarter of this year at the latest."

Once ready, the chip developed by Tesla and Samsung will use it in Cybertruck, which will come with the full Self-Driving mode, as early as next year.

However, media reports last month had also suggested that TSMC will start manufacturing the HW 4.0 chip for Tesla this year, and they will also enter the electric car chip market.

This component is particularly critical for Tesla both from a performance point of view and for the brand image. Internally, the chip bears the name "FSD Computer", in other words the computer for autonomous driving.

However, Elon Musk has reminded several times, Tesla's value is based more on its software capabilities than on the mechanical part of vehicles.

Despite being satisfied with the current version, Elon Musk reaffirmed at the Tesla AI Day, held last month, that the company will continue to investigate new versions of this FSD Computer 1.

Tesla's Autopilot and Full Self Driving (FSD) features have drawn flak from different corners recently. The US National Transportation Safety Board has already expressed its displeasure over basic safety issues with these features. The US National Highway Traffic Safety and Administration (NHTSA) agency is already is already investigating more than 750,000 Tesla electric vehicles after crashes involving Tesla vehicles with activated autopilot systems have raised security concerns.

Five years ago, Tesla had revealed that all vehicles produced thereafter already had the necessary hardware to ensure 100% autonomous driving. After a particularly tense collaboration with Nvidia, Tesla decided in 2016 to produce its own SoCs. The recruitment of Jim Keller, a former AMD and Apple, who left since, was just in this direction.