Tesla Model 3 yellow cab out and about in Big Apple. And NYC can't keep calm

The Tesla Model 3 has become the first electric vehicle to be eligible for use in the New York yellow cab fleet after being approved by the city's Taxi and Limousine Commission.
By : HT Auto Desk
| Updated on: 08 Nov 2020, 03:08 PM 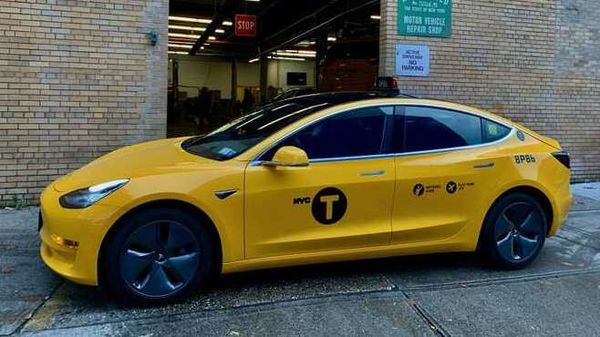 The first Tesla Model 3 yellow cab has hit the roads of the Big Apple City - gearing up the electrification of New York's yellow cab fleet of more than 13,000 taxis.

The Model 3 has become the first electric vehicle to be eligible for use in the New York yellow cab fleet after being approved by the New York City Taxi and Limousine Commission (TLC), Electrek reported.

The first Model 3 yellow cab was spotted in Manhattan near a Tesla store and the images of the cab have gone viral on social media.

Though electric vehicles have not been popularly used as taxis, with the entry of the Tesla electric sedan, the trend is catching up. Tesla's EVs are particularly popular with taxi services in European markets such as the Netherlands. Over 100 Tesla vehicles have been operating as taxis out of the Amsterdam airport since 2014, as per Electrek.

(Also read | Tesla has 18% market share in global EV sales. But rivals are hoping to catch up)

Before Model 3 became first eligible electric vehicle for the New York yellow cab fleet, Nissan Leafs had been considered for a trial back in 2013, as per Teslarati. The city had launched a pilot program for all-electric taxis with a fleet of six first-gen Nissan Leafs on Earth Day. However, by 2015, the Leafs were decommissioned because the TLC observed that the vehicles required drivers to alter their driving habits due to their EPA-estimated 84-mile range.

Model 3 sedans meet the requirements for the New York yellow cab service as they have ample interior space, air conditioning for rear-seat passengers, easy-to-clean seats, enough cabin space to install the clear partition that separates the driver from passengers in the backseat. And, even the shortest-range Model 3 has a range of at least 220 miles per charge.