Tesla CEO Elon usk referred to ongoing crisis in China due to the resurgence of Covid-19 pandemic which has hampered production of its electric vehicles.
By : HT Auto Desk
| Updated on: 14 Jun 2022, 09:28 AM 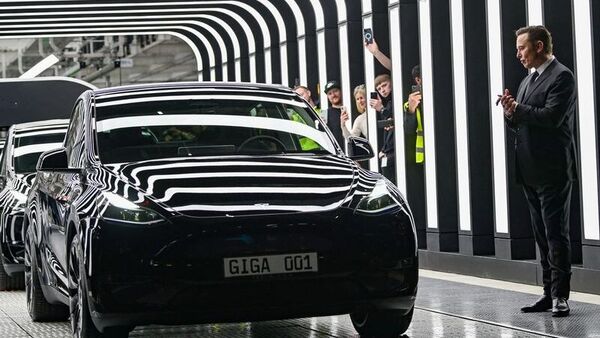 Tesla CEO Elon Musk (right) has warned his employees to be prepared for more hard work as the EV maker projects a very tough quarter ahead. (File photo)

World's largest electric vehicle manufacturer Tesla is facing the heat of supply chain crisis and resurgence of Covid-19 pandemic in China, its biggest hub outside United States. After a phenomenal 2021, Tesla is playing catch-up to hit its sales targets this year due to various challenges. Tesla CEO Elon Musk has said that the EV maker is in for a ‘very tough quarter’ through an internal memo recently, as reported by Bloomberg. Musk has asked his employees to pull their socks up to help put Tesla back on track.

In his email circulated among Tesla employees last weekend, Elon Musk wrote, “This has been a very tough quarter, primarily due to supply chain and production challenges in China. So we need to rally hard to recover!"

Tesla has its manufacturing facility in China's commercial capital Shanghai. In recent weeks, the facility was suspended for a few days due to Covid-19 restrictions. However, production resumed with output almost tripling at the Shanghai Gigafactory, with hopes that Tesla can match its sales targets in the next quarter.

Tesla's latest Gigafactory in home base is also gearing up for full production capacity soon. The facility, located in Austin, Texas, will manufacture the much-awaited Cybertruck among other EV models from the carmaker. The Berlin Gigafactory, Tesla's second facility outside of the US, has also started production with around 1,000 cars already manufactured. The first Tesla Gigfactory in Fremont, California, also achieved record day of production recently.

Elon Musk's latest email comes days after Reuters reported that the CEO had sent an internal memo warning of layoffs soon. He had hinted at almost 10 percent reduction in Tesla's overall workforce globally after his ‘super bad feeling’ about the economy.

As far as sales are concerned, Tesla ended the 2020-21 financial year with a record 310,048 cars delivered in the first three months this year. Tesla achieved the record despite lower forecasts from analysts as well as the ongoing chip shortage crisis. According to latest estimates, Tesla is expected to sell around 296,000 units of electric vehicles between April and June.