Tesla CEO Elon Musk has highlighted how upcoming Cybertruck will come with futuristic pieces of technology that people cannot imagine being implemented today.It is very likely that Tesla Cybertruck will feature a yoke instead of a traditional steering wheel.
By : HT Auto Desk
| Updated on: 30 Nov 2021, 05:18 PM 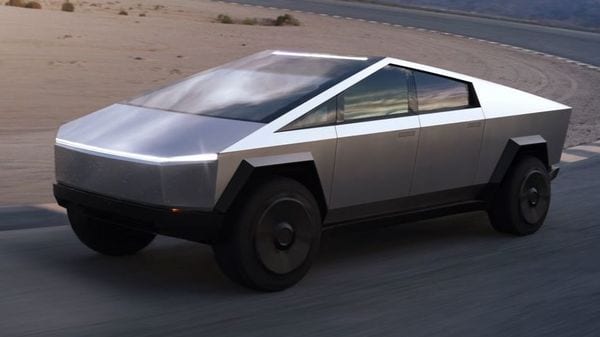 While the wait for Tesla Cybertruck may be getting longer, the excitement and discussions around the pickup truck is still going strong, alongside the reservations. The EV company's CEO Elon Musk recently said that the Cybertruck will feature Tesla's flagship tech for future, meaning it will be a technology powerhouse.

Tesla may implement the steer-by-wire system on the Cybertruck that it is currently being developed and make it the first vehicle where the yoke will actually not feel like an afterthought, as per Insideevs.

Musk highlighted how Tesla Cybertruck will come with futuristic pieces of technology that people cannot imagine being implemented today, though he did not exactly mention what technology he was referring to. The Cybertruck is expected to enter production late next year.

A recent report by Electrek had revealed that the upcoming Cybertruck already has an estimated 1.3 million units booked and the amount totaling approximately $80 billion. Tesla Cybertruck had been showcased for the first time ever in November of 2019 and has been touted as a battery-powered vehicle with the capability of a pick-up but performance of a sportscar.

The Cybertruck will cost as much as $39,900 for the base single-motor version and $69,900 for the tri-motor range-topper. The vehicle claims to have a range of nearly 950 kms, acceleration to 100 kmph in 3 seconds and capability to tow up to 6,300 kilos.