Elon Musk had showcased the Cybertruck recently and its windows had been smashed in a demonstration gone wrong.In the photo from 1995, a young Elon Musk is seen repairing a car window.
By : IANS
| Updated on: 12 Dec 2019, 04:08 PM 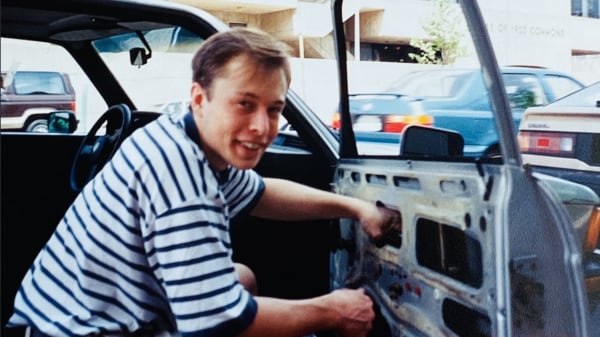 Multi-billionaire tech mogul Elon Musk's mother, Maye Musk took to Twitter to share a photo of a 23- or 24-year-old Elon working on the broken window of a 1978 BMW back in 1995.

"And people said you knew nothing about cars," Musk's mother wrote in a tweet, hashtagging it "1995" and "Found This Photo".

Tesla and SpaceX CEO noted that he could not afford to pay for a mechanic to fix his car, so he did it himself with junkyard parts.

"Could not afford to pay for repairs, so I fixed almost everything on that car from parts in the junkyard. Ironically, that's me replacing broken side window glass. The circle is complete lol," Musk replied on Wednesday.

Musk said that he was repairing the window because thieves had broken in and stolen the radio, which was worth maybe $20.

Recently, taking on the pickup truck market leader Ford, Tesla CEO Elon Musk unveiled the ambitious six-seater electric "Cybertruck" at a packed house here that will soon be seen on the roads.