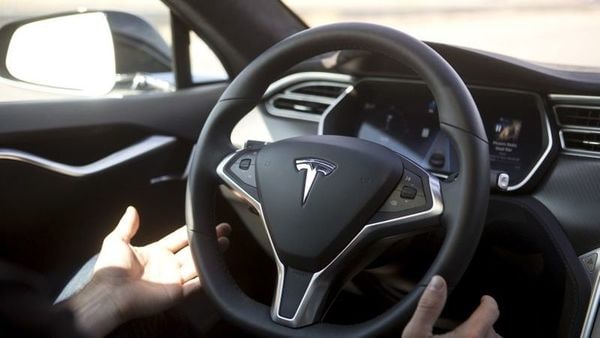 File photo of the interior of a Tesla electric vehicle

US EV giant Tesla has been asked to explain by the country's safety agency whether an over-the-air (OTA) update delivered to the software system of some vehicles was a repair that should have been conducted by recalling the vehicles physically. The OTA update constituted an improvement in its driver assistance system or Autopilot to prevent collisions with emergency vehicles.

The update will improve the Autopilot system's ability to detect emergency vehicle lights in low-light conditions. The US National Highway Transportation Safety Administration (NHTSA) said in a letter to Tesla, "The Safety Act imposes an obligation on manufacturers of motor vehicles and motor vehicle equipment to initiate a recall by notifying NHTSA when they determine vehicles or equipment they produced contain defects related to motor vehicle safety."

(Also read | Wait for Tesla Roadster, Cybertruck gets longer; production pushed back to 2023)

Apart from this, the safety regulator addressed its concerns over the company's Full Self-Driving (FSD) beta testing. The carmaker recently delayed the roll out of the updated version of its FSD beta software, which so far has only been available to roughly 2,000 people.

The NHTSA said that non-disclosure agreements signed by customers participating in the FSD beta testing may impede the agency's access to information needed to assess the program. The agency usually relies on reports from consumers as a key source of information in evaluating potential safety defects. “Any agreement that may prevent or dissuade participants in the early access beta release program from reporting safety concerns to NHTSA is unacceptable," the letter read.

In August, NHTSA had launched a probe of into Tesla’s Autopilot program after a dozen collisions were reported involving the Autopilot system and first-responder vehicles. The regulator is currently assessing the technologies and methods that Tesla uses to monitor, assist and enforce drivers' engagement when using Autopilot. It is also assessing the Autopilot system's ability to detect objects and events on the road, and its response to them.