The Infiniti G37X was accidentally driven into the pool by a teenager who escaped unhurt in the incident that took place in Colorado, United States.
By : HT Auto Desk
| Updated on: 20 Jul 2021, 10:45 AM 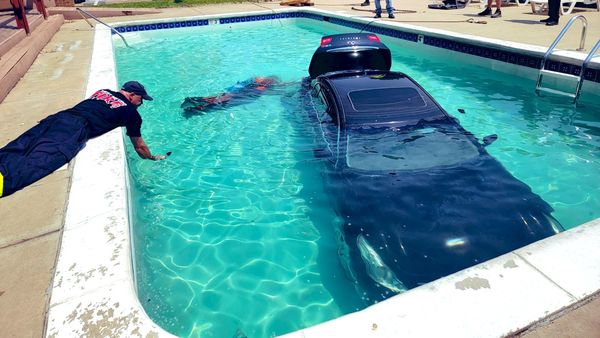 An Infiniti G37X luxury sedan was accidentally driven into the pool by a teenager who escaped unhurt in the incident that took place in Colorado, United States. (Photo courtesy: Twitter/@LakewoodPDCO)

It is not quite the kind of infinity pool you would like to use in the sizzling heat. But as it turned out, a backyard swimming pool had an Infiniti car parked in it in Colorado, United States when a teenager accidentally drove the car into it.

The incident took place last week in a neighbourhood just off of West Mississippi Avenue and to the west of South Wadsworth Boulevard. Videos and images went viral on social media of the Infiniti car lodged in the pool.

The local fire rescue team shared a video on Twitter showing the blue Infiniti car partially submerged in what appears to be a backyard pool. The video also shows how its divers were pressed into service to pull the car out of water with help of machines.

It is believed that the teen who was at the wheels, accidentally pressed the accelerators instead of brake while trying to park the car. His mistake drove the car straight into the pool.

Fortunately, no one was injured in the incident. According to the fire officials, the teen driver, along with a passenger, got out of the car unscathed. The teenage driver was let off by the officials with a stern caution for reckless driving. It is not clear if he was old enough to be behind the wheels legally.

The incident drew a lot of laughter on social media, including the authorities responsible to clear out the mess. "Going in was probably a bit easier than coming out," West Metro Fire Rescue officials wrote on Twiiter. The Lakewood Police shared images of the submerged car saying, "Just FYI, the best line for this is ‘Check out our new Infiniti Pool'." Another user wrote, "Take a look at our new Infiniti Pool," referring to the car model, Infiniti.

Going in was probably a bit easier than coming out. Our dive team, assisting in recovering a car that went into a pool in the 1100 blk. of South Flower Circle. Driver & passenger got out- without injury. @LakewoodPDCO issued a citation to a teen driver. pic.twitter.com/AMHoafSycj

The car was later towed out of the pool and a video was shared by the fire rescue team how it was done.