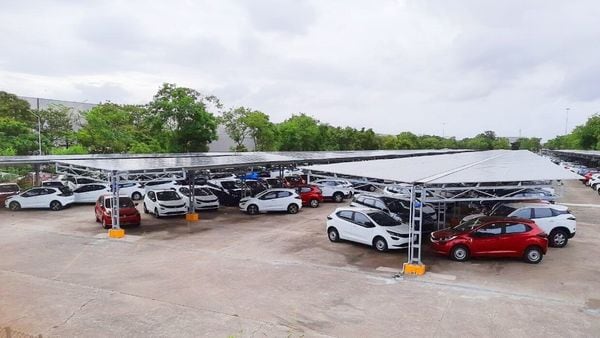 Tata Motors has taken a major step towards attaining carbon neutrality as it joined hands with Tata Power to inaugurate a solar carport in Pune today. The carmaker claims that solar carport is India's largest.

The new carport, which will also double up as covered car parking facility, is capable of reducing carbon emission by Tata Motors by 7,000 tons every year. The solar carport in Pune spans across more than 30,000 square meters. The 6.2 MWp solar carport will generate 86.4 lakh kWh of electricity per year.

Shailesh Chandra, President of Passenger Vehicle Business Unit at Tata Motors, said, "We have always been conscious of the need to conserve energy and are committed towards achieving 100 per cent renewable energy sources for all our operations. Our partnership with Tata Power to deploy India’s largest solar carport at our car plant in Pune is a step in that direction."

Tata Motors has an aim to achieve carbon neutrality by 2039. Last year, the carmaker had joined hands with Tata Power for a Power Purchase Agreement (PPA). The solar carport has been operationalised in less than 10 months despite Covid-19 challenges.

Praveer Sinha, CEO and MD at Tata Power, said, "Our partnership is a testament to our collective efforts to lower the carbon footprint and provide innovative and future-focused green energy solutions. We will continue to explore new ways to harness clean resources and offer them to our partners and customers."