Tata Altroz makes it to India Book of Records for covering 1,603 kms in 24 hours

A Pune resident drove an Altroz from Satara to Bengaluru and returned to Pune in 24 hours.Altroz was first launched in India in January of 2020 and has since seen the addition of a turbo engine option.
By : HT Auto Desk
| Updated on: 17 Feb 2021, 06:18 PM 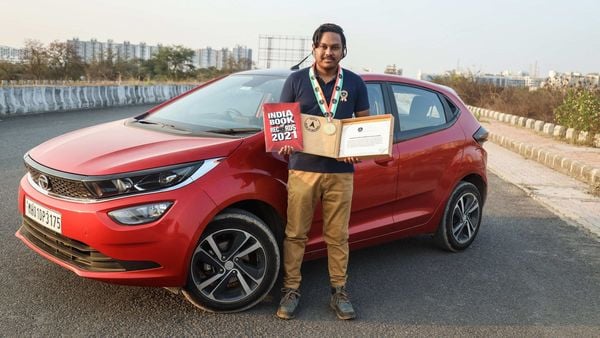 Pune resident Devjeet Saha drove the Altroz from Satara to Bengaluru and returned to Pune in a 24-hour time period.

Tata Altroz has made it to the India Book of Records after covering a distance of 1,603 kilometres in 24 hours, the longest distance ever covered by a passenger vehicle in the country in this time frame. The journey saw a particular Altroz go from Satara to Bengaluru and then return to Pune between December 15 and December 16 of last year.

The journey was undertaken by Pune resident Devjeet Saha who says that the Altroz was able to complete the 24-hour journey without any mechanical problems. "I am humbled to have been given the opportunity to embark on this landmark journey and am honored to have been inducted into the India Book of Records," he said. "The ride and handling of the car made the voyage not only comfortable but also an exhilarating one."

Tata Motors also celebrated the achievement and highlighted the ability of Altroz to handle a wide variety of challenges. "We are delighted that Mr. Saha chose the Altroz as his companion in embarking on the long journey to achieve this rare milestone," said Vivek Srivatsa, Head, Marketing, Passenger Vehicles Business Unit, Tata Motors. "With this accomplishment, the Altroz has created yet another benchmark in the passenger vehicles segment and we hope that through achievements like these, we continue to build trust within our customers."

Altroz was first launched in India in January of 2020 with Tata Motors positioning it as a premium hatchback option. The car has fared reasonably well in a market that is otherwise seeing veering towards SUVs of all shapes and sizes. The launch of the updated Hyundai i20 may have upped rivalry in the segment but Altroz recently also received a turbo engine option directed towards driving enthusiasts. The car is currently available with both petrol as well as diesel engine options, and starts at around ₹5.69 lakh (ex showroom)