Skoda Enyaq iV is the first series production model from the brand to come based on the VW Group's Modular Electrification Toolkit (MEB) platform.
By : HT Auto Desk
| Updated on: 12 Dec 2020, 03:20 PM 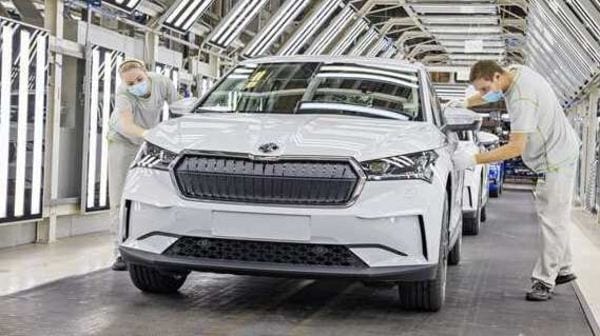 Skoda Auto has commenced series production of the upcoming Enyaq iV electric SUV at its Mlada Boleslav. It is the first series production model from Skoda to come based on the VW Group's Modular Electrification Toolkit (MEB). The firm has announced that the plant will manufacture 350 units of the battery-powered SUV every day. For the record, the same plant is also responsible for delivering Octavia and the Karoq series which are based on the MQB and MEB platforms, respectively. The firm has announced that it has invested 32 million euros in the modification of its plants to enable produce both MEB and MQB architectures on the same manufacturing line.

Michael Oeljeklaus, Skoda Auto Board Member for Production and Logistics said, “The Enyaq iV is Skoda's first series-production model that was designed as an all-electric vehicle from the outset. This means our new SUV also places entirely different demands on manufacturing processes and production sequences than models with combustion engines."

The 2021 Enyaq iV electric SUV will feature multiple engine configurations and variants with different ranges. Internationally, the SUV will be launched in at least five different variants. The entry-level Enyaq 50 iV which be plonked with a 55 kWh battery pack responsible for delivering 340 km of full charge range. The system output will stand at 196 bhp which will be backed up by 220 Nm of peak torque. This model will be capable of achieving a top speed of 160 kmph. The most powerful iteration in the range will deliver blistering 302 bhp of power and 460 Nm of peak torque.

As far as its India launch goes, no official plans have been confirmed yet.