A court in Le Havre ordered Renault on May 7 to halt operations at the Sandouville plant in Normandy, citing inadequate information given to workers’ representatives on protective measures against the coronavirus.
By : Bloomberg
| Updated on: 11 May 2020, 11:25 AM 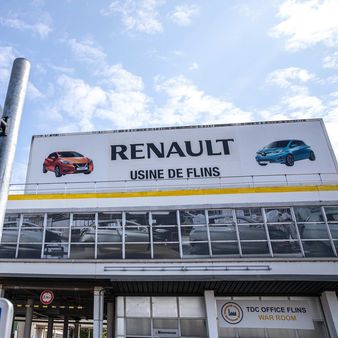 File photo: A logo sits on display above the Renault SA factory in France. European car sales were almost wiped out in April after governments around the continent closed auto dealerships and other businesses to slow the spread of the coronavirus.

Legal action forcing Renault SA to suspend production at one of its factories is “irresponsible and unfounded," labor union CFDT said as the car maker vowed to appeal the court ruling.

A court in Le Havre ordered Renault on May 7 to halt operations at the Sandouville plant in Normandy, citing inadequate information given to workers’ representatives on protective measures against the coronavirus. The legal action had been initiated by another labor organization, CGT.

“We have to stop these types of practices," CFDT chief Laurent Berger said on France Inter radio station on Saturday. “The reality is that the factory will remain closed on Monday and 700 temporary workers will be sent home. This isn’t a service to the workers."

The plant, which has 1,848 employees according to the AFP newswire, had partially resumed output on April 28 after a six-week halt caused by the pandemic. The facility produces mainly the Renault Trafic van.

“Activity in the Sandouville factory was halted as of May 7 in the afternoon and this will last until further notice," Renault said in a statement. A spokesperson added that no other legal cases are pending with relation to the virus and workers’ return to work.

On April 29, Renault won the European Union’s approval to receive a 5 billion euro ($5.4 billion) loan guarantee from the French government to help mitigate the impact of the pandemic.

Renault has begun a gradual restart of its factories in Europe in recent weeks, including car assembly operations at another French site in Flins, near Paris. The carmaker and its domestic rival PSA Group have vowed to aggressively promote vehicle sales to overcome the sharp industry downturn.