Renault TikTok page will also give users a behind-the-scenes look at video and photo shootings and major events, accompanied by original sounds.
By : HT Auto Desk
| Updated on: 18 Jun 2022, 07:23 PM 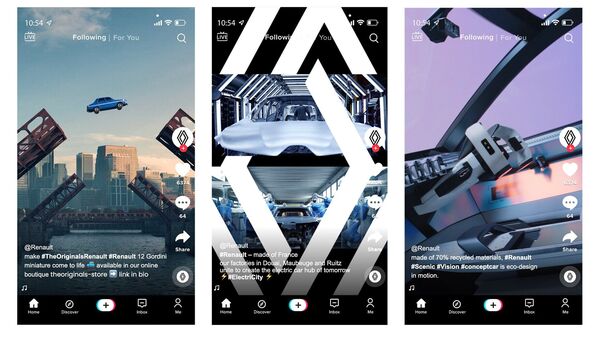 Through this move, Renault wants to attract a younger clientele with short and entertaining videos.

Renault has become the first French car company to be on TikTok. Renault already has its presence on social media sites such as Facebook, Instagram, LinkedIn, Twitter and YouTube. Through this move, Renault wants to attract a younger clientele with short and entertaining videos. Renault launched the account at the ChangeNOW summit and shared its first content focusing on its new concept-car Renault Scenic Vision.

Renault recently unveiled the Scenic Vision concept car with an electric and hydrogen powertrain. The concept car comes with an eco-design which means the automaker has used 70 per cent recycled materials. The process of upscaling also includes several closed loops, had stated the French car manufacturer.

Renault shared that it will create premium videos and will also present new products along with carrying out special campaigns that will be made in collaboration with content creators of the social media platform. Renault’s TikTok page will also give users a behind-the-scenes look at video and photo shootings and major events, accompanied by original sounds. Renault also stated it has decided to expand its digital presence and hence will also open an account on Pinterest that has more than 400 million active users per month.

A previous report stated Renault partnered with Amazon Music to make the application available in its models. Renault said with this partnership, it wants to improve the customer experience as owners will be able to access millions of songs and thousands of playlists directly from the OpenR Link interface. The automaker said this service will be offered in the latest generation of Renault vehicles that will feature the OpenR Link system in Germany, Spain, Italy, France and the United Kingdom.