Reliance operates 1.36 million barrels per day refineries at Jamnagar in Gujarat and is one of the leading petrochemical manufacturers in the world.
By : PTI
| Updated on: 15 Jul 2020, 06:43 PM 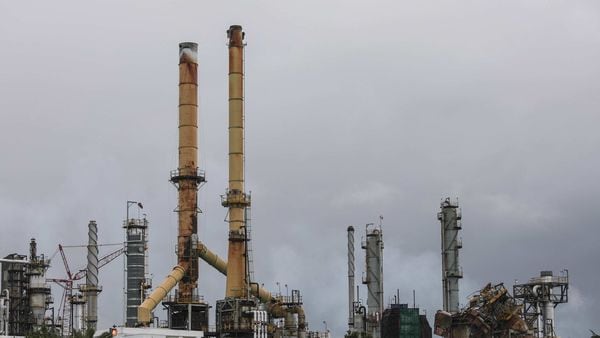 Globally, a conventional refinery produces around 8 per cent of naphtha, which may be used as a chemical feedstock. (Representational photo)

Reliance Industries, operator of the world's largest refining complex, will replace transportation auto fuels with clean electricity and hydrogen as it set a target to become net carbon-zero by 2035, its chairman Mukesh Ambani said on Wednesday.

The oil-telecom-to-retail conglomerate, which has pivoted away from energy to the new economy in recent years, will use technology to convert carbon dioxide into valuable chemicals and other material building blocks.

The company operates 1.36 million barrels per day refineries at Jamnagar in Gujarat and is one of the leading petrochemical manufacturers in the world.

"While Reliance will remain a user of crude oil and natural gas, we are committed to embracing new technologies to convert our carbon dioxide into useful products and chemicals," he said at the company's annual general meeting.

In a conventional refinery, three products (petrol, diesel and ATF) comprise 60-70 per cent of the product slate. As refiners increase in size and have access to more capital, they come up with complex projects like delayed coker (or petcoke gasifier). This converts low-value products into high-value products.

Globally, a conventional refinery produces around 8 per cent of naphtha, which may be used as a chemical feedstock. This rises to 17-20 per cent in refinery-cum-petrochemical complexes. Comparatively, Reliance has a 24 per cent conversion rate of 'oil-to-chemicals' currently and may be targeting 70 per cent conversion.

The trend of increasing the percentage of chemicals in the overall production is due to the vast difference in profitability combined with an increased threat from electric vehicles to petrol and diesel. "We will develop next-gen carbon capture and storage technologies," he said. "We are evaluating novel catalytic and electrochemical transformations to use CO2 as a valuable feedstock."

"And at the same time, we will replace transportation fuels with clean electricity and hydrogen," he said. "We will combine our strengths in digital, power electronics, advanced materials and electrochemistry to build full-stack electrolyser and fuel cell solutions in India."

Reliance, he said, will build an optimal mix of reliable, clean and affordable energy with hydrogen, wind, solar, fuel cells and battery.

"On successful implementation of this strategy, we target to become net carbon-zero by 2035," he said. "We have a 15-year vision to build Reliance as one of the world's leading new energy and new materials company."

The new energy business based on the principle of carbon recycle and circular economy is a multi-trillion opportunity for India and the world, he said, adding this was also an opportunity to make clean and green energy abundantly available at an affordable price.

"More than a business, this is our seva to save Planet Earth from the ravages of climate change. We shall spare no effort in realising this dream. From time to time, I shall apprise you of our progress in this business," he added.