Home Auto News Puch 290 Gd, An All Wheel Drive Ambulance From 1994, Goes Up For Sale 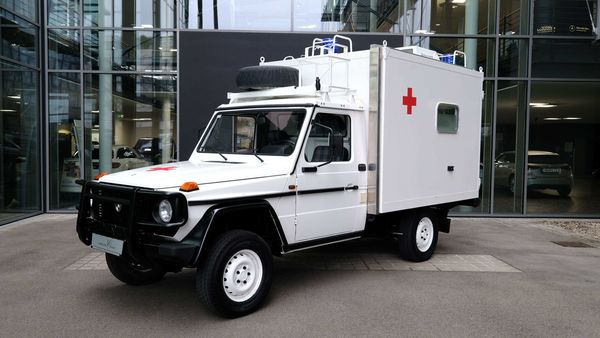 Old is gold or in this case, it may be the gold standard of emergency medical transportation with a 1994 Puch 290 GD ambulance being offered on sale by Lorinser Classic in Germany. The vehicle may have seen several years since coming off the production line but remains a very capable machine that can potentially operate in a host of climatic conditions and on tough terrains as well.

According to details posted on Lorinser Classic, the ambulance has done just 4,500 kilometers in its 26 years which is also a sign of the near-pristine condition it is in. Powered by a 5-cylinder diesel engine with 95 hp and 192 Nm of torque, the ambulance features a five-speed manual transmission unit and its all-wheel drive ensures that reaching emergency situations in challenging terrain could pose little to no risk. In case of a puncture, there is a spare wheel mounted on the roof rack as well.

Power steering and differential lock on front and rear axles further enhance the capabilities of the Puch 290 GD while there also is a factory-fitted dual air conditioning system.

The interiors of the three-door vehicle has black checked fabric and it has been with the original owner since rolling out of production.

The asking price of Puch 290 GD ambulance is 79,900 euros (approximately ₹68 lakh) which may have as much to do with its drive capabilities as its low mileage. It also comes fitted with almost every medical equipment that was originally placed inside and was in use by the Federal Department of Defense and Civil Protection of Switzerland.