Porsche and Tesla face off in Germany’s Green Hell

Porsche and Tesla are vying for electric vehicle bragging rights on Germany’s Nürburgring, a circuit with 73 tight turns, changing elevations and a brutal length of more than 20 kilometers winding through a leafy forest.
By : Bloomberg
| Updated on: 15 Sep 2019, 05:47 PM 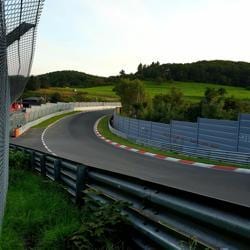 First there was derision. Then mockery turned into admiration. Now a battle is unfolding between two of the most revered names in the automobile world, Porsche and Tesla Inc. on one of the world's most challenging race tracks.

"We welcome competition, it helps you to get better step by step. But of course you always have to compare apples with apples," Porsche AG Chief Executive Officer Oliver Blume told Bloomberg Friday on the sidelines of a panel discussion near the Frankfurt auto show.

The two automakers are vying for electric vehicle bragging rights on Germany's Nürburgring, a circuit with 73 tight turns (Silverstone in the U.K. has 18), changing elevations and a brutal length of more than 20 kilometers (12.4 miles) winding through a leafy forest, earning it the nickname "Green Hell."

It's here that Porsche's new Taycan Turbo S set the record as the fastest four-door electric car last month, clocking in at 7 minutes and 42 seconds. The feat wasn't lost on a rival sitting thousands of miles away in California: Tesla's CEO Elon Musk. Always one to relish a good fight, Musk picked up the gauntlet and has dispatched a Model S to the German hinterland to reclaim the bragging rights as king of the electric sedan.

The confrontation has all the ingredients of an epic battle between incumbent and upstart, infused with social-media feeds that have energized die-hard fans on either side of the Atlantic wondering which of the two cars can shave those vital extra seconds off their lap time. Adding to the frenzy is former Formula One racing champion Nico Rosberg, who chimed in on Twitter offering to pilot the Tesla. Musk happily accepted in a tweeted reply, but it's unclear who actually will be behind the wheel.

Porsche's Blume said Tesla had selected another driver "who knows the Nürburgring well," but he declined to provide a name.

Musk has a lot riding on the challenge. After Porsche unveiled the Taycan Turbo and Turbo S as its first electric cars last week, he teased the brand for its nomenclature -- a turbocharger is only found in a combustion engine. Following the initial ribbing, he found more charitable words in a later tweet, acknowledging the Taycan "does seem like a good car" and its Nürburgring track time "is great."

Blume said Friday the respect is mutual, but was careful to note the Taycan's record was achieved with a normal series production car that came straight from the assembly line and can be purchased by customers. Tesla, in contrast, has already been working for about two weeks near the track to modify a Model S for racing purposes to achieve the fastest-possible time, the Porsche CEO said.

While a series version Model S wouldn't be able to beat the Taycan's lap time, a modified race version with tweaked suspension and brakes "could go in that direction," he said. "We have a lot of respect for Tesla, they have achieved a lot and Elon Musk built this company from scratch."

The stakes are equally high for Volkswagen AG's luxury sports car unit, which has watched Tesla turn itself into a veritable alternative for customers seeking a high-performance car but with an electric powertrain, an open flank that the Stuttgart-based manufacturer now hopes to protect with the Taycan.

Musk posted on Sept. 6 that a Model S would make an appearance at the track "next week." Indeed, a modified Model S has been spotted testing on the Nürburgring Nordschleife, according to Car and Driver, which appeared to show the car on the track as part of a general driving session open to others. The model sported flared fenders and an enlarged opening at the front, probably for extra cooling.

When exactly the car might attempt to break the Taycan's record remains shrouded in mystery. Tesla didn't respond to a request for comment on its plans. A spokesman for the Nürburgring said Tesla has not officially booked exclusive time with the track.

The Tesla-Porsche competition may be a marketing spectacle, but one that nevertheless helps to draw attention to electric vehicles, said Gene Munster, a managing partner at venture capital firm Loup Ventures and longtime Tesla bull. Munster predicted Tesla would race a souped-up version of the Model S at Nürburgring, and that it will beat Porsche's Taycan record.

"Elon wouldn't take it to the track if they didn't think they would win," Munster said in a phone interview. "He's fiercely competitive, and he loves sticking it to traditional automakers. It's his hobby. He feels confident."

Tesla tweeted on Sept. 11 that a Model S with a new "Plaid" powertrain beat the record for the fastest four-door sedan at Laguna Seca, a race track near Monterey, California, though the time wasn't achieved during a competitive event and hasn't been endorsed by the raceway.

Pushing the round below 10 minutes is the ambition of all Nürburgring daredevils. The track is open to both professional and amateur drivers, and the fastest time with a street-legal sports car was 6 minutes and 44 seconds, performed in a Porsche GT2 RS MR on Oct. 25 last year, according to the circuit's website. That's an average speed of 185 kilometers an hour for the 20.8 kilometer stretch.